There is a certain kind of Silicon Valley striver that I find abhorrent but, being separated by them by a full continent I feel I’m far enough removed to perhaps understand their wild-eyed efforts at self promotion and I often give the weirdos out in Palo Alto a pass. This time I can’t.

A founder tweeted this last night to some buddies, suggesting that given a choice he’d rather pop a TC writer rather than Hitler or Stalin. He was joking, sure, but what kind of joke was it? And why did it percolate up? What strange mental calculus made this founder think he could make that joke about a site which is, in every way, primarily on his side? And what stranger calculus still did he use to decide that this should be a public joke?

I’ve excised his primary info so the web spiders don’t ding him for life, but it’s easy enough to find. He doesn’t deserve more anonymity than I’ve given him. He also apologized.

Curious, I checked to see how many times this founder emailed us. I found this: 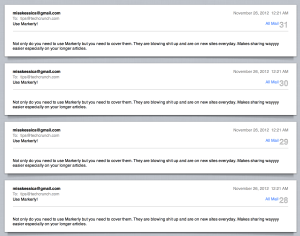 This is a fairly old trick that I’ve seen over and over – an anonymous email that says “OH HAI DID YOU EVER USE BURBRLY? IT IS BLOWING UP! UZE IT!” – yet I found 30 copies of it in my mailbox. This means either the founder doesn’t understand marketing, sendmail, or both. This move alone would give me pause about his product, providing I had paid attention.

This sort of virulent joking and attempts at “viral marketing” aren’t new. Mike Arrington went through a horrible period and stopped public appearances when someone spit on him. People have come to his house and woken him in his bed. Other founders have threatened to come to the office and stand outside like some strange samurai acolyte until we come out and talk to them. Some of threats eventually turned into full-bore stalking.

I get it. It’s hard to get publicity. People don’t want to talk to you on the phone. People don’t care about your startup. How difficult it is to give up everything and focus, monomaniacally on your social network for goats! And then no one cares!

Here’s the honest truth: First, you’re not a special snowflake buffeted by the ill winds of iniquity, destined for the cesspool while other founders are lauded, feted, and written about. 99% of the time when we don’t write about your thing it’s because your thing isn’t very good. That’s not an objective assessment, obviously, but we’ve seen enough stuff to know what’s good and what’s not good. We also have certain beats. Maybe your idea is so far out of our wheelhouse that it’s hanging onto the rudder. Maybe you can rejigger it or pivot or realize that maybe you should be pitching AdAge?

Here’s another honest truth: we do care about people who are careful and thoughtful. You are important to us. I love it when people succeed. If I can do any good in this world I’d like to think I can make someone feel successful and help them, in some ancillary way, feed themselves and their family. My reward is seeing a better world built up through technology. But if you pin your anger on us or Mashable or TNW or RRW or GigaOm or whatever else, you’re doing it wrong. The world isn’t out to get you. In fact, it doesn’t care about you. The key, then, is a careful cultivation of image, of relationships, and of your personal brand. For example, we don’t like Kevin Systrom and Bre Pettis because they pay us big money. We like Kevin and Bre because they’re nice guys. They’re successful because they’re solid founders and have endeared themselves with a number of people in power.

The not-so-greats will think I’m blowing this out of proportion. I’m not. As I say to my children, “This is not OK.” Obsession has a stink. You can smell it on some of the greats in our industry and you can really smell it on the not-so-greats. It’s never apparent on the real winners.

If you feel you’re treated unfairly, email me at john@techcrunch. Or email eldon@. Or alexia@. Or matt@. Or email anyone, really. Explain your position. Tell us a little bit about your product. Understand that we, like you, are obsessive about our jobs and we’re very busy. But if we’re Hitler then you’re Satan. Either chill out and figure out a way through life that doesn’t involve waking up each morning with gritted teeth or get out.