Often the stuff that gets press attention from Kickstarter tends to focus on the consumer market, but the Hydra is a new project on the crowdfunding site that could make big waves in everything from hobby electronics, to home robotics, to industrial manufacturing. It’s a compact power supply with three outputs, each with completely configurable voltage. Put simply, the Hydra is almost like a Raspberry Pi for the power supply industry: small, customizable, and relatively inexpensive at $200.

Power supplies are required for any electronic device that needs to plug into a wall outlet or battery pack in order to function. They’re responsible for converting electrical power from one form to another, and making sure that the voltage out to devices matches their requirements. The Hydra can handle voltage in of anywhere between 5V and 14V, and push it back out via its three outputs to a range of 3V and 12V, with each of the outputs individually configurable via USB, Bluetooth (and a smartphone app) or serial connection. 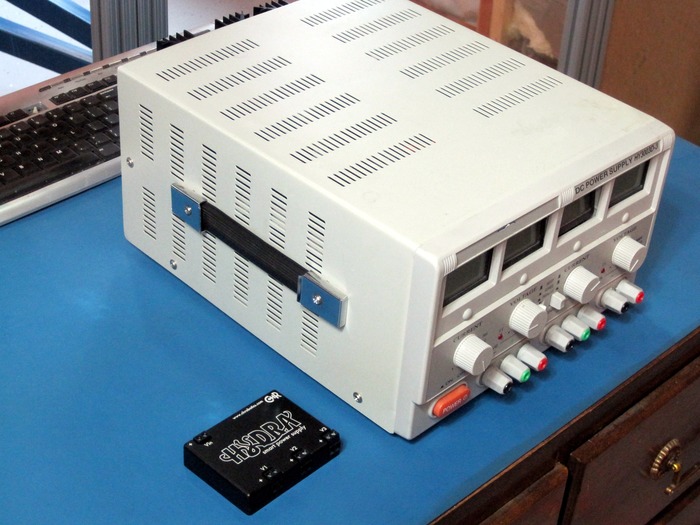 According to the Hydra project creators, the Hydra serves essentially as a full-featured replacement for a bench-top power supply, which, as you can see from the picture above, is a much, much larger device. It can be configured to work as a battery charger for most types of rechargeable batteries, and it can also power high-power LEDs, electronics and wireless transmitters. You can use it for mobile devices by connecting it to a battery pack, or build an entire industrial robot for a factory production line with it, depending on your needs.

The project is the brainchild of Caleb Chamberlain, who holds a Master’s degree in electrical engineering from BYU, and founded CH Robotics to design and create inertial and orientation sensors for different kinds of robots. The Hydra is already a functional prototype, and Chamberlain says there’s a production process in place to start creating them at volume once they get the startup capital, which is likely why he’s only looking for $10K to fund the product. The Hydra is available for $160 through pre-order, or $212 for a Bluetooth-enabled version, both of which have an estimated delivery date of April.

The Hydra may not be as consumer-friendly as an iPhone case or a Bluetooth speaker, but it’s a Kickstarter project that could have considerable impact in amateur, small business and industrial markets, and as such it’s definitely one to watch.