TuneIn is a massively popular online radio service with more than 40 million monthly active listeners, according to its own data. The reason for its success is mostly due to its popular mobile apps and not necessarily because of its cool website. Until today, TuneIn’s web presence was functional but looked somewhat outdated. Now, however, the service has given itself a complete web makeover. The old, text-heavy design that emphasized station names has been replaced with large album cover-like images that indicate what’s currently playing on a given station. The experience, TuneIn tells us, is meant to “replicate the experience people used to have in a record store.”

This new “content-first display,” as TuneIn calls it, marks the most significant update of the service’s homepage and station pages in a very long time. Last July, TuneIn told us that its mobile listener base had grown 267 percent year-over-year and that total listening hours had increased 348 percent. All the while, the service’s web presence didn’t quite keep pace with the development of its mobile apps and its expansion into connected cars. 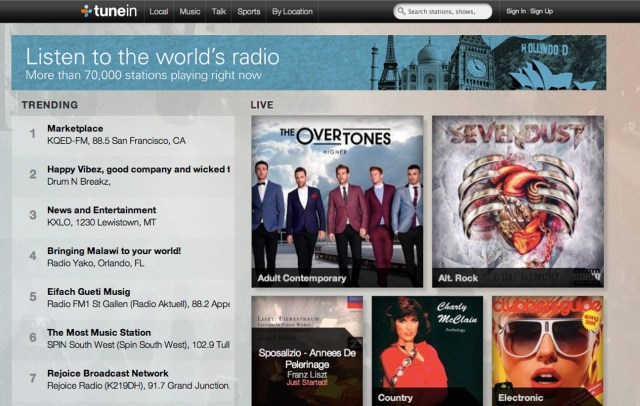 “Not everybody knows what they want to listen to when they come to TuneIn,” said Kristin George, TuneIn’s director of product in a statement earlier today. “When you visit the new site today, you get a better idea of our depth of content. This is a big step away from the older web experience, which presented the TuneIn content offering as more of a directory of stations. We’re hoping this new layout does a better job of showing people just how exciting it is to have the world’s audio at their fingertips.”

With today’s update, TuneIn is also bringing its list of trending stations, which was previously only available through its mobile app, to the web.

TuneIn currently offers its users free access to over 70,000 stations from around the globe and over 2 million on-demand programs. The service raised a $16 million funding round from heavyweights like General Catalyst Partners, Jafco Ventures, Google Ventures and Sequoia Capital last August. At the time, the company said it planned to use this money to increase its headcount and grow its product development initiatives. Chances are, today’s improved web presence is a direct result of this. 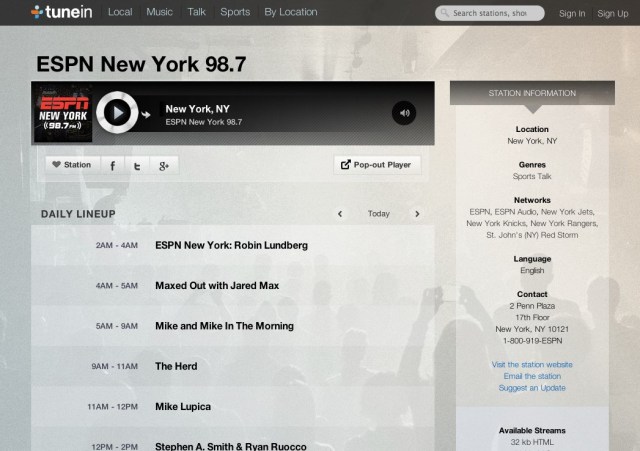