The recently launched AngelPad-backed payments startup called Ribbon is today introducing functionality that allows users to buy from merchants and other sellers directly in the Facebook News Feed. In addition, the company is confirming the close of its $1.6 million seed round, led by Tim Draper’s Draper Associates. Participating in the round were Siemer Ventures, Emil Michael (Klout COO), Naguib Sawiris, Winston Ibrahim (Hydros) and MicroVentures.

Ribbon, which launched out of AngelPad’s fall 2012 class of startups (as Kout, Inc.), is focused on making digital payments easier by introducing a one-page checkout system that can be linked to from web, email and social media sites like Facebook, Twitter, YouTube, Pinterest or anywhere else. But unlike other social commerce, such as Chirpify, which lets you sell on Instagram and Twitter, or Soldsie, which works via Facebook comments, for example, Ribbon’s system is unique in that it’s being designed from the ground up to work cross-platform. It auto-detects where the user is coming from, then tailors the one-page resulting experience accordingly. 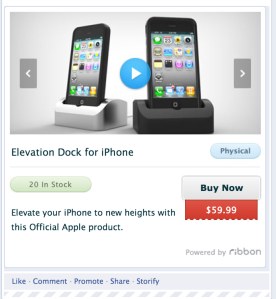 With today’s launch of Facebook in-stream payments, Ribbon is making social e-commerce even easier than before. Previously, Ribbon would direct Facebook users who clicked on the provided link to a Facebook app, allowing them to complete the transaction on Facebook itself.

“This is even a step shorter,” says co-founder Hany Rashwan of today’s launch of in-stream payments. “We want to save your credit card as soon as you use it, give you one-click checkout as soon as you buy, and it’s truly in-stream at this point.”

The company will create Ribbon accounts for users and email receipts following the purchase. 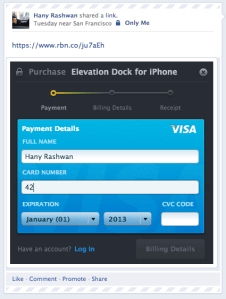 The interface to these in-stream payments is coded in Flash, so this exact same functionality only works on the desktop version of Facebook for now. On mobile, users can click the link to be redirected to a mobile web-optimized version of the Ribbon experience. (This is because Facebook doesn’t allow for the kind of functionality that the in-stream payments widget now offers within its mobile application.)

The Ribbon in-stream interface on Facebook is fairly robust, supporting a product photo, title, description, inventory level indicator, price and “buy” button. When users click to purchase, they’re walked through a short screen – without leaving their News Feed – where they enter their payment and billing details. Current Ribbon users can also just log in to move through the process even faster, using their saved info.

Rashwan says the company is targeting everyone from smaller, Etsy-type sellers to the “Hollywood crowd” with its product. Ribbon is touting a couple of early adopter success stories, including Grammy-nominated artist Paul Wall who has been using Ribbon to sell his songs, and a charity concert event that raised $4,000 via Ribbon. However, Rashwan declined to provide user adoption numbers, as the service is still too new.

While Ribbon’s new in-stream Facebook payments makes buying on Facebook several steps easier than before, the bigger question is whether or not Facebook users want to participate in e-commerce activities on the social network. Facebook Gifts, the site’s own integrated e-commerce efforts, for example, have been slow to ramp up. Combined with Promoted Posts, the two only accounted for less than $5 million in Q4 2012.

The market for “f-commerce” is very new, and some folks are simply doing it wrong in these early days. Some market predictions peg social commerce (meaning Facebook and others) as growing to $30 billion by 2015. Asked for his thoughts on the forthcoming social commerce wave, Rashwan explains that earlier efforts may not have appealed to users because they too closely tried to replicate the traditional e-commerce model directly. “Bigger brands have had trouble selling on Facebook because shopping in a shopping cart does not make sense inside a tab, inside an app,” he says, “and that’s the experience we’ve had so far.”

But if a user happens to come across a News Feed post from an artist, maker, charity or other type of seller, they may be more likely to buy, he believes. Rashwan also adds that because Facebook is so good with discovery, there might be an option to extend beyond payments in the future, as well.

Meaning? “To generate interest in the item without buying it. You could ‘want’ it instead of buying it, and that saves it with us,” he explains.

In other words, Ribbon could offer its users both the option for a buy button and a want button in the future, generating something of a universal wishlist for its audience. This idea is remarkably similar in spirit to Facebook’s Pinteresque Collections feature, which resumed its second phase of testing in December. But on Facebook, users can currently only “want” items (or Save, Add, Collect or Wishlist, depending on the version of the product they’re seeing). In Ribbon, a user’s wishlist would actually be connected with a user’s saved credit card information, and that could potentially be more powerful.

Going forward, Ribbon plans to target YouTube next, as well as enrich the analytics for sellers on its back-end. The company also recently launched its API and hired Teens in Tech’s Daniel Brusilovsky to help with Ribbon’s Biz Dev efforts.