According to Google, a woman named Latanya is probably a lot more likely to end up in jail than someone named Jill. A new study finds advertisements linked to commonly African-American names are far more likely to offer criminal services.

Names “primarily to black babies, such as DeShawn, Darnell and Jermaine, generated ads suggestive of an arrest in 81 to 86 percent of name searches,” writes Harvard University’s Latanya Sweeney, in the open access journal, ArXiv. The unintentional effect of these ads probably has awful psychological impact on the thousands of black citizens, as well as their potential employers, who see their names next to unfortunately racist ads.

Below is an actual advertisement reading, “Latanya Farrell, Arrested?” when the researcher googled her own name. 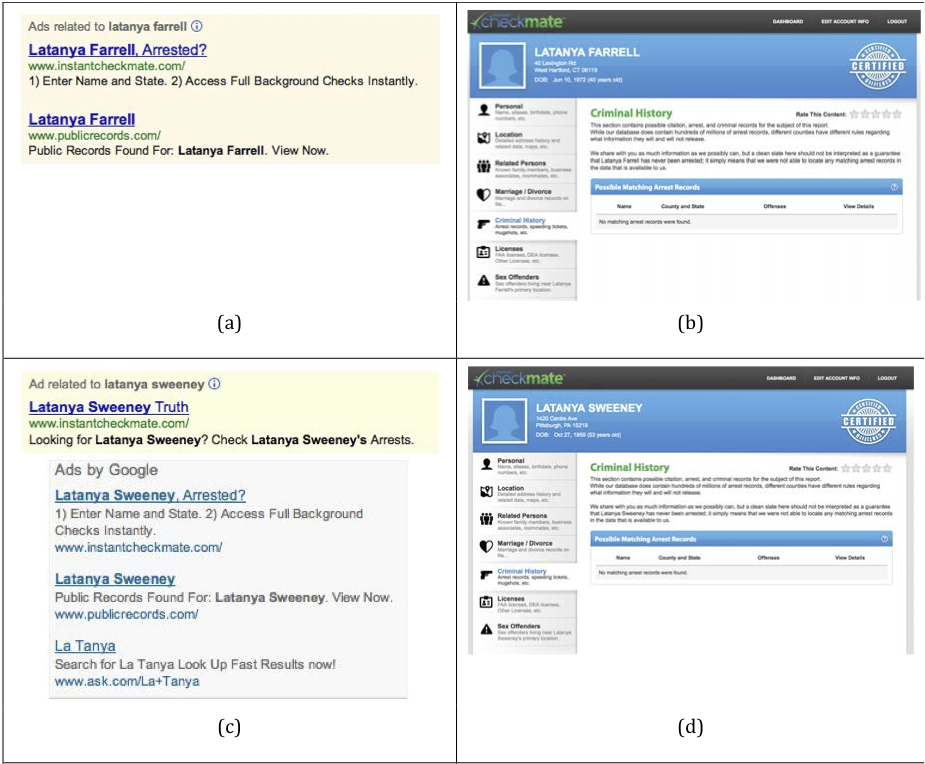 A lot of headlines have implied that Google search, itself, is racist. This is, in fact, not the case. Google simply mines data and serves up ads automatically that are more likely to be clicked on. The research raises “questions as to whether Google’s advertising technology exposes racial bias in society and how ad and search technology can develop to assure racial fairness,” writes Sweeney.

However, it is a well-known fact that the perception of racial inferiority causes devastating impact on the education and job performance of minorities. Black students who are reminded of their race’s social struggles perform far worse on IQ and standardized tests. So-called “Stereotype threat,” is a leading theory as to why some races are underrepresented in America’s universities.

Black-sounding names are also a resume burden. One study found that applying to a job with a commonly black name resulted in 50 percent fewer callbacks. Imagine the impact of a job recruiter googling a potential employee and being confronted with all sorts of criminally laden advertisements for a black candidate, and not for a white candidate. It’s easy to see how, on average, more black men and women will be left out.

Statistically speaking, a name like Darnell is more likely to be associated with an arrest than “Todd.” But, when society is confronted with this fact, the results trigger our latent sterotypes. In other words, in some cases, more information isn’t always better.