Geeking out about your favorite things can be embarrassing or annoying on the big social networks. But Lady Gaga’s tech team Backplane proved with her Little Monsters site that fans want an online home. Now it’s branching out to create communities for 10 more bands and brands, starting with Conde Nast and Guns’N’Roses. Backplane’s ready to take you down to Paradise City.

The dedicated fan club social network idea helped make Lady Gaga one of the most popular entertainers in the world. Named after what Gaga calls her loyalists, Little Monsters lets people share their love for the shocking she-devil of pop and get exclusive messages and media from the Lady herself.

Little Monsters pulled in nearly 1 million registered users and 2.3 million monthly unique visitors. Gaga crowdsourced merchandise designs from them that became her best sellers, and concert pre-sales on the site let her pack arenas around the globe. Backplane believes there’s real money to be made harnessing the passion people have for their interests. So do investors, considering Backplane has raised $5.8 million from A-List VCs, including Sequoia Capital, Greylock Discovery Fund, Google Ventures, Founders Fund Angel, Menlo Ventures, and SV Angel. 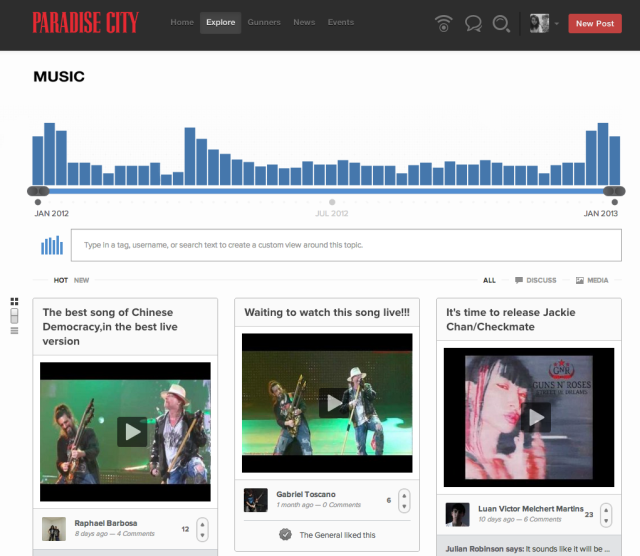 Today, Backplane steps out from her shadow. It’s staffed up, hiring designers, engineers, and Yahoo Sports and Entertainment’s former head of business development Jan D’Alessandro. By the end up the year, it plans to have 10 Little Monsters-style sites running. The first are Paradise City, for Guns’N’Roses lovers, and Fingerprints for Conde Nast’s media site users.

When I talked to Backplane’s CEO Matt Michelsen, he gave me the usual dry mission statements about “creating a solution to help people organize around communities, affinities, movement.” What was interesting was when he railed against Facebook, citing the low percentage of fans that Facebook Pages hit with each of their posts, and saying “their reach is not what they want it to be”.

That’s a really serious issue for anyone with a Facebook Page or Twitter account, which is practically everyone. On those networks, brands, artists, and even religious groups don’t own the connections to their fans. They’re at the mercy of the platform, who at any time could say “Hey, you spent years signing up fans or buying subscribers with ads, but now you have to pay to reach them.”

Those networks are at least theoretically free to set up on, and are where people spend their time. Backplane will have to demonstrate unique value to convince potential clients not to bet on Facebook or Twitter, and that their existing teams can’t build standalone communities.

Another issue with Backplane’s plan is that these sites won’t work for every musician or company. I laughed out loud at an event where washed-up 2000’s rapper Jermaine Dupri told a crowd of entrepreneurs that people would flock to his private social network because “I’m me!” Yeah, but nobody gives a damn about you anymore, JD.

When you’ve got 50 million Facebook followers like Lady Gaga or 30 million across Facebook and Twitter like Guns’N’Roses, though, it could work. That is, if the artist is willing to put in the work. Little Monsters thrived because Gaga sat down and actually used it herself. With serious commitment and tech from studios like Backplane, celebrities, media properties, and more can set up profitable little echo chambers exalting their greatness. And in the process, give fans a place where they don’t feel like weirdos for worshipping what they love.