The BlackBerry keyboard is dead, long live the BlackBerry keyboard. Despite the full throttle touchscreen focus of its new mobile platform, BlackBerry 10, the company formerly known as RIM has not forgotten its most fervent fans’ adoration of those little plastic keys and has thrown them a bone — or rather a handset.

Meet the hybrid BlackBerry Q10 (below right, next to the full-touch Z10), a touchscreen smartphone that also packs in a full physical Qwerty keyboard for those who just can’t bring themselves to stop stroking plastic keys. The lack of an optical nav pad may still cause long-time BlackBerry lovers a spot of angst. 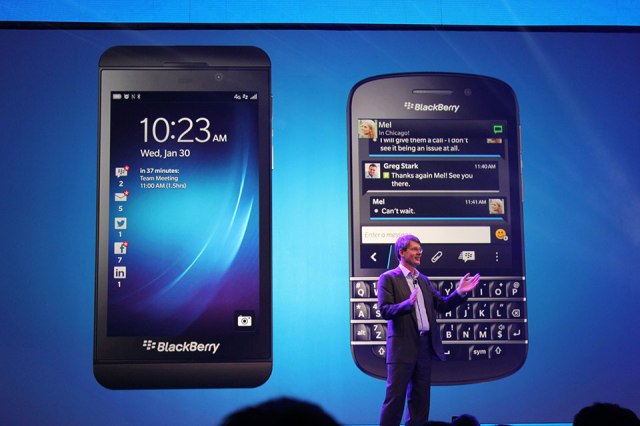 The company showed off the Q10 at the launch of BB10 today. “We know there are a lot of physical keyboard lovers out there,” said CEO Thorsten Heins.

Another difference between the Z10 and the Q10 is that the latter necessarily lacks some of the ‘smart keyboard’ software features found on BB10 full-touch devices. The full touchscreen keyboard includes a predictive text feature that positions suggested words above the next letter you’d have to type to spell the word out — so you can quickly swipe up to add the whole word. That smart positioning just isn’t possible with plastic keys getting in the way.

The Z10’s virtual keyboard also customises to its owner in a way that the Q10’s physical Qwerty never can: the central strike points of each key can move by up to half a key to adjust to your particular typing style (with the aim of reducing typos). Again, good luck trying to wear down plastic keys to suit your sausage fingers.

As with the Z10, the Q10’s BB10 software analyses your messaging history to learn more about the language you use — and will apparently incorporate what it learns about your vocab and slang into its next-word suggestions.

Despite RIM’s efforts to oust the old and usher in the new with BB10 it’s not a surprise the company has kept a toehold in the physical keyboard camp. Back in September Heins reaffirmed RIM’s commitment to keys, telling attendees at the BlackBerry Jam developers’ conference that both full touchscreen and physical keyboard BB10 devices would be unboxed. Today he made good on that pledge.

Heins also described the keyboard as one of the main points of focus for RIM in BB10, along with productivity, reliability, security and multi-tasking.

Although the Z10 will be available in the U.K. from tomorrow, in Canada from February 5 and in the U.S. from March — with an estimated retail pricing of $149.99 on a three year contract — there’s no word (yet) on the Q10’s availability or pricing. 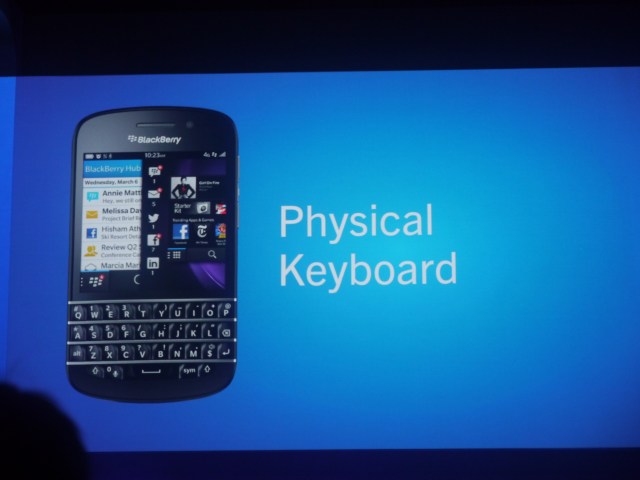