Because of the rankings, the top-grossing games and the ones that get the most downloads are known. But Apple and Google are much more conservative with what they reveal about apps and their active usage. And active usage is a far more important metric than the download, because the more retention and engagement an app has, the more opportunity there is for users to transact inside of it.

Onavo, a Sequoia-backed company that tracks active app usage for millions of users through its data compression products, took at a look at the most used games in the U.S. in December. What Onavo calls “market share” below is the percentage of U.S. iPhone owners that used the game that month.

Some of them are surprising. The top few like Zynga’s Words With Friends and Imangi Studio’s Temple Run are not. But the next one is — Touch Hockey from Flipside5. Flow by Big Duck Games comes after that. Following that is Rovio’s Angry Birds – an obvious candidate for one of the top 10 apps. 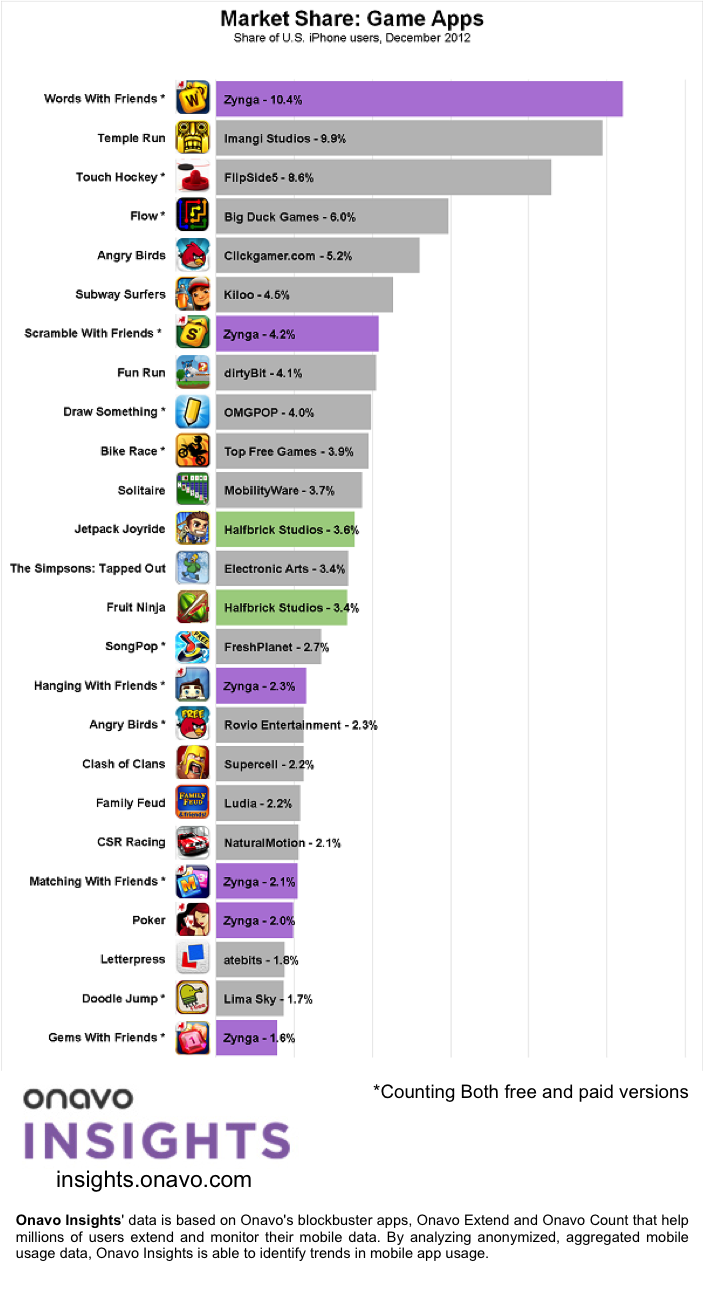 If we look at the reach of developers, you’ll see that Zynga is in the lead (again not surprising given that they said they had 33 million daily active users on mobile platforms in July). While mobile daily actives likely declined in the third quarter because of Draw Something’s decline, CEO Mark Pincus said on the last earnings call that the company definitely had the largest mobile gaming network in the West on Android and iOS.

They’re followed by Temple Run-makers Imangi Studios. Apple said the husband-and-wife team behind Temple Run saw their game downloaded more than 75 million times last year.  They’re followed by Flipside5, which is ahead of Electronic Arts, the $4.6 billion gaming company that said it brought $1.18 billion in fourth-quarter revenue in its earnings release today.

Is it weird that totally bootstrapped teams like Imangi can outrun (hah!) multibillion dollar companies like EA on iOS? Yes, but this is the nature of the iOS platform, with its comparatively low barriers to entry — at least relative to the packaged goods world.

Time and time again, we’ve seen small teams like Angry Birds-maker Rovio in 2009 come out of nowhere and build businesses that gross near or more than nine-figures in revenue per year. Last month’s breakout dirtyBit’s FunRun is from a hobbyist team of computer science students from Trondheim, Norway. 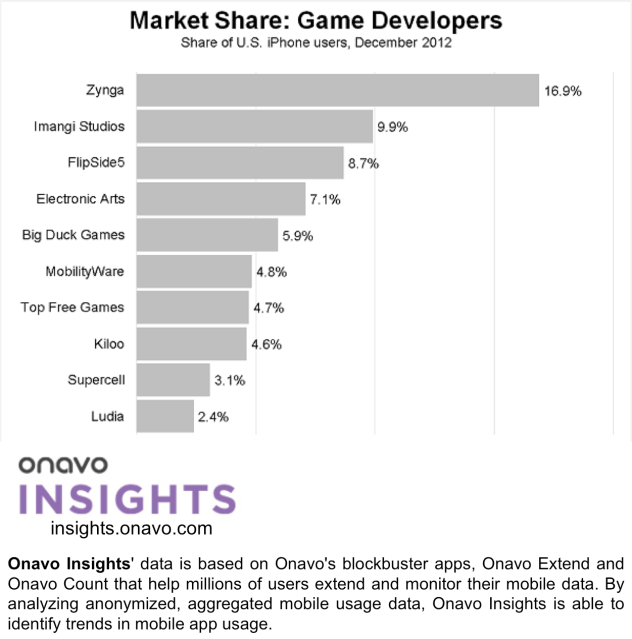 Just for background on methodology, Onavo has two products: Extend, which helps consumers save on their mobile bills by compressing data usage and Onavo Count, which tells you how much data you’re using.

Because they have single-digit millions of users, they can peek into daily mobile traffic to different apps. On top of that, because Onavo creates consumer-facing products and doesn’t work directly with developers, the company can publish data on active usage for specific apps. This is unlike other mobile analytics companies like Flurry, which can’t really disclose performance of specific apps because developers would probably not work with them.