Another day, another vote of investor confidence for educational gaming. Today, Pluto Media, the Menlo Park-based maker of educational, tablet-based games for kids, announced that it has raised $500K in seed funding from Learn Capital’s Rob Hutter, along with individual investments from NewSchools Venture Fund’s Jennifer Carolan and Peter Relan, the co-founder of OpenFeint, WebVan, Crowdstar and YouWeb. The follow-on seed financing adds to the $500K the startup raised from former Accel partner Abhay Parekh and Silver Lake’s Dave Roux in December 2011, bringing its total funding to $1 million.

A product of Peter Relan’s YouWeb — the five-year-old mobile and gaming-focused accelerator that produced companies like OpenFeint, Crowdstar, Agawi and Spaceport — Pluto Media is on a mission to bring quality “edu-tainment” to young people, starting with music. After joining YouWeb in 2010, Pluto Media Founder Luis Sampedro launched the company’s flagship app, Pluto Learns Piano, in December 2011.

Much as MindSnacks does for language learning, the free iOS app aims to give kids a fun, animated way to learn to play piano. The app lets kids choose from a handful of familiar songs, which run across the screen in lines (simulating sheet music), while users move a friendly penguin up and down the screen in attempt to catch fish as they swim by. Each fish corresponds to a particular letter and musical note and, once the gamer is able to catch all fish, following along on the app’s keyboard, they earn points and unlock achievements.

While the company isn’t yet sharing the number of downloads, Sampedro did say that 13 million songs were played over the course of 2012, with over 30 million minutes of playtime spent on the app. The startup’s follow-on seed raise was based on the app’s strong early adoption and will allow it to expand beyond iOS to other platforms and move beyond piano to support additional instruments. 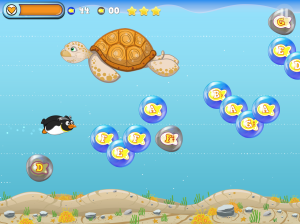 Today, there are now a host of musical education apps and learn-to-play piano products out there, but the founder believes that Pluto Learns Piano has been able to appeal to young gamers by employing the “Suzuki method” of teaching music — that is to say, teaching through immersion and context, rather than by forcing students to read musical notes, for example.

Essentially, there are two stages of learning in Pluto’s vision, the founder says, with the first being to engage kids in a game while they hear the songs, and the second being actually learning to play what they’ve heard. For young gamers, if they’re not able to engage in gameplay while hearing a song, they are less likely to become immersed, thus reducing the chance that they’ll actually want to learn to play it. From the data accumulated thus far, Sampedro tells us, kids who engage with a game first and then continue into lesson mode tend to make much more progress than those who go straight into practice or lesson mode.

Based on this technique, the startup plans to expand Pluto Learns Piano into a “learn, create, share” platform for education in a host of creative subjects, beginning, of course, with music. While the founder isn’t yet ready to elaborate in any detail on his plans for the platform, he did say that it will support multiple instruments, over 40 classical and folk songs and multi-player gameplay for collaborative, band-style performances.

What’s more, with its new round of seed funding in tow, Pluto Media plans to go one step further to include user-generated content so that kids can not only learn but also create and share their own songs. The platform will essentially serve as the theme for the company’s future development, as it plans to build a single app platform that will allow kids to learn to play instruments, create their own original music content in groups or individually and then share that content with their peers.

“With the rise in popularity of education and gaming on tablets, paired with the number of children who now have access to these devices in schools and homes, the transition we’re seeing to educational gaming is a natural one,” Sampedro says. “We think this affords an opportunity to make a big dent in the growing edutainment market, and change the way children learn, beginning at a young age, providing a fun experience with real-life results.”

For more on Pluto Media, find it at home here.