Soundrop, the social “listening room” service that is similar to Turntable.fm, has found a lot of success on the music streaming service Spotify, with 500 million streams of its rooms in its debut year. Now, Oslo, Noway-based Soundrop is taking its growth strategy up a notch: from today, people can also create and embed listening rooms in Facebook, too.

The Facebook service will let people embed existing playrooms on to Pages — specifically fan pages — on Facebook. There, people can add a mixture of audio tracks (from Spotify) and videos (from YouTube and Vevo), and then interact with each other on the page while in the room together. Artists that have signed on early to use the Soundrop Facebook feature include Matisyahu, Delphic, MC Lars, Owl City, Dan Deacon, Devlin, Nick Cave, Franz Ferdinand, Hot Chip, ABBA, Public Enemy and Greg Dulli from the Afghan Whigs.

For now, you cannot create a room on Facebook and embed it on Spotify, although that seems to be the plan longer term as the service continues to grow. At the bottom of this post are two screenshots of how the two different playrooms on Spotify and now Facebook look compared to each other.

Facebook is a first in a couple of ways here: it is the first third-party platform outside of Spotify where users can consume Soundrop’s service; and it is the first time that Soundrop has incorporated videos into the experience — in this case, using content from YouTube and Vevo to do it. This, of course, helps also increase engagement on Facebook — a much-coveted metric for the social network as it continues to ramp up its advertising and other revenue-generating strategies.

“The Facebook app is a step up for us to add more pixels to the big picture,” Inge Sandvik, co-founder and CEO of Soundrop, told me in a Skype interview from the Midem music conference in France.

But it’s also just one step in what Soundrop hopes to do eventually: “Our strategy is to give everyone our SDK to embed the rooms in apps, websites, mobile apps. Everywhere,” he said. “We want to scale out the rooms everywhere. They are going to be accessible from TVs, cars, phones, tablets, laptops – all in real time.”

The idea here is that the listening rooms remain the same rooms from platform to platform, with only the interfaces varying depending on where they are getting used.

The vision is an ambitious one. In a Stockholm hack day last week, Soundrop built a multiplayer game based on Firefox’s BrowserQuest massive multiplayer online game.

“You can walk around in a world and go up to the Gangam Style guy [PSY] and the music will start playing, or you can go into the house of dubstep and meet Skrillex,” says Sandvik.  “It’s a visual way of discovering the exact same music that others are listening to in real time, but with a totally different UI. We are building parallel dimensions and in this way people are consuming the same music and are able to piggy back on other fans ability to curate music for them.”

Sandvik says that Soundrop has yet to launch this formally but plans to, probably later this year.

As part of this expansion of the Soundrop service, the company is also honing in on ways that it will use the platform to make more money. Longer term, as I’ve written before (when Soundrop picked up a $3 million investment led by lead Spotify backer Northzone), there are plans for licensing rooms and other services around the listening experience.

But the case of today’s service, it’s about aggregating more audience on to platforms, like Spotify, Vevo and YouTube, where the artists are already popular and making money through ads or royalty payments. “We only drive traffic to places where artists are making money,” notes Sandvik. 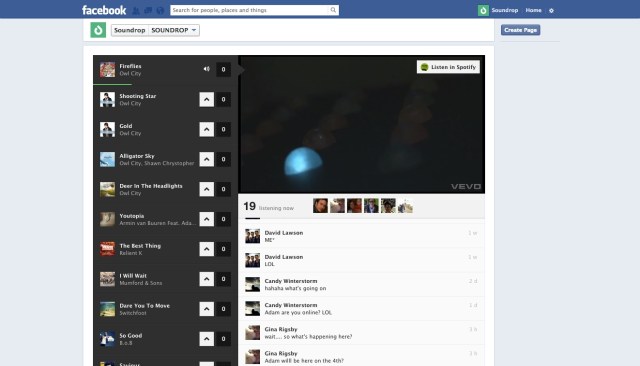 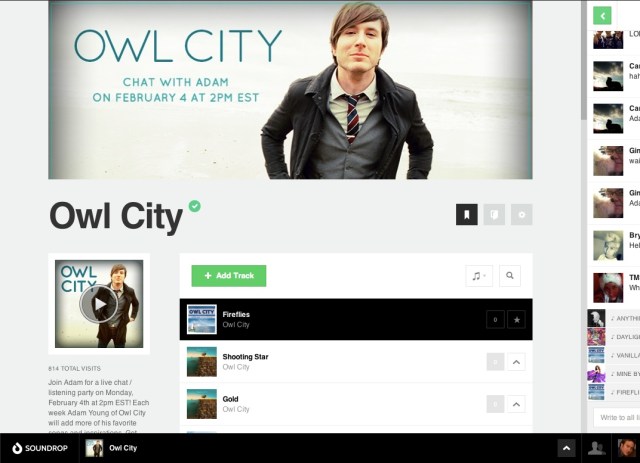