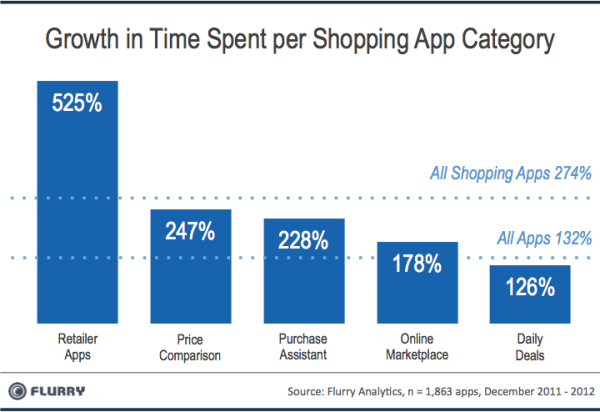 Consumers spent six times as much time in retailer apps in December compared to a year earlier, showing that shopping and commerce is finally beginning to take off on mobile platforms.

Flurry, the mobile analytics startup, looked at about 1,800 iOS and Android apps from December 2011 to December of last year. They also broke it down into five other categories including Retailer Apps, Price Comparison, Purchase Assistant, Online Marketplace and Daily Deals.

Time spent in apps overall grew by 132 percent year-over-year, so as you can see above, basically every category except for daily deals outpaced growth in the rest of the ecosystem.

Even though Daily Deals apps like Groupon, which have spent millions on user acquisition, have seen their market share fall, they still saw the time spent metric at least double. Groupon has said in the past that one-third of its revenues come from mobile purchases in North America. 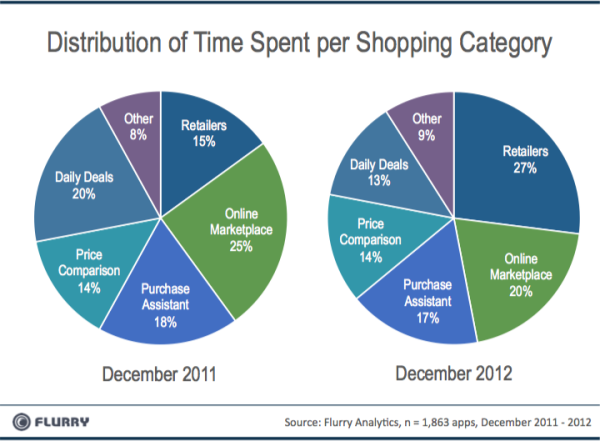 But you can see how market share has changed for mobile commerce apps. Daily deals apps, which were very early to mobile platforms and could spend millions upon millions to acquire users every year, were first-movers. Now the rest of the space is catching up as big box retailers figure out how to use mobile apps to promote transactions.

Retailers nearly doubled their market share in the shopping category, with 27 percent of time spent up from 15 percent a year ago. Virtually every other category was either flat or down year-over-year in terms of market share. Marketplace apps like eBay and Amazon fell to 20 percent marketshare from 25 percent a year ago, while price comparison and purchase assistant apps were basically flat year-on-year.