Boomerang, the Chicago-based social gifting service which sprung up this summer as a way for users to send gifts to friends (similar to Wrapp), is now moving into the B2B space with the debut of a platform for brands. At launch, Boomerang has 20 national brands on board, as well as some local businesses in Chicago, Austin, New York, and Indianapolis.

The company has been through a number of changes over the years. You might remember it as Gtrot, a social travel planner later turned local discovery service. As a part of the local discovery incarnation of Gtrot, the site started to monetize by getting local businesses to offer gifts on its platform. For example, a restaurant might have offered free drinks, or a discount.

In August, Gtrot moved its user base over to Boomerang (or rang.com, as the domain name goes), to more fully develop the gifting angle. “Our initial play was local,” explains Boomerang CEO Zachary Smith, “and in the November to December timeframe, we moved to getting national brands to do the same thing.” At that time, the company expanded from its initial test market of Chicago into the other cities listed above, and it debuted its iOS and Android applications. As with Wrapp, the new Boomerang site and apps tap into users’ Facebook data to alert them to gift-buying opportunities. After signing in, users can see all their friends’ special occasions, like birthdays, anniversaries, new jobs, new homes, and other life events, and then send either free or paid gifts. 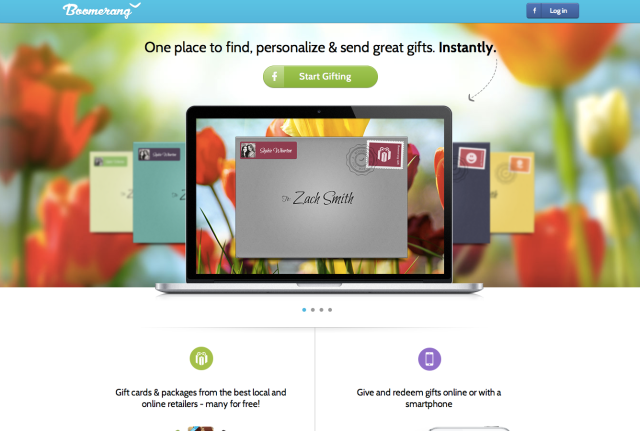 Getting the big name brands on board for the consumer-facing service was the first step for Boomerang, and now it’s opening up its platform in order to allow the brands themselves to send gifts directly to their own customer base either via email, social media, or both.

To date, the company has worked with a number of national names, including Ghirardelli, BeautyBridge, illy, Diamond Candles, Vlado, City Winery, Urban Adventures, and others which it can’t name. It has been seeing some early, positive results, Smith tells us. In one case study, for example, a brand ran a test promotion on Boomerang targeting 10 percent of its user base (150,000 emails), and then ran the same promotion using its traditional methods to target the rest of its customers. “We outperformed on a revenue-per-email basis by 82 percent,” Smith claims. “Now they’re sending out [Boomerang gifts] to their entire user base for Valentine’s Day,” he says.

Boomerang’s promotions are all performance-based, where it takes a share of the revenue, as opposed to charging up-front fees. However, Smith couldn’t disclose the exact numbers here. As for the promotions themselves, Boomerang provides email templates, all the creative involved, recommended messaging that’s optimized for Facebook and Twitter, and more. From the participating brand, all Boomerang needs is the affiliate link and promo code. You can see an example here.

Smith says that going forward, the B2B side will account for around 50 percent of the business’s activity and investment. 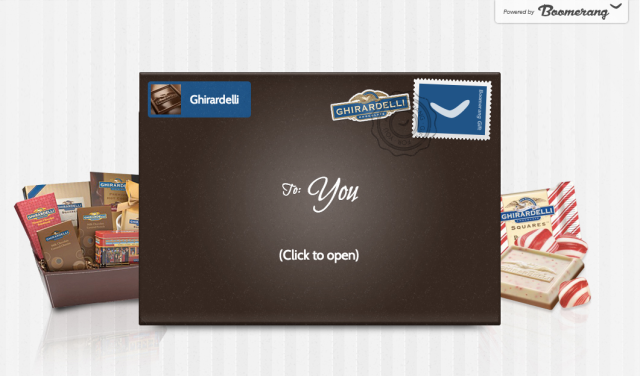 Lightbank had backed the company with around $1 million when it was Gtrot, and went in again with another million when it pivoted to Boomerang. Still based in Chicago, Boomerang is now just shy of ten full-time employees, and it’s ready to raise a new round to fund its B2B expansion efforts.