It probably doesn’t come as a surprise, but the mobile app economy continues to grow like gangbusters — like it stole something. Research2Guidance found that revenue from the top five app stores hit $8 billion in 2012 (up 27 percent from the year prior), while about 26,000 applications are submitted to iOS’ App Store each week. As a result, AdEven expects Apple to add at least 435K apps to its catalog in 2013 — on top of the million-plus already live.

So, how can we fix this problem? Well, there are a number of ways: fixing discovery (rankings and categories, among other things), search, overall quality, and so on. But a handful of students and entrepreneurs from Boston think they have a better idea: a pre-App Store app store. Huh?

Do we really need another app store, you ask? No, not really. GetJar filled that role nicely, and even that was a bit of a stretch. But PreApps, a new Boston-based startup, is today launching a platform that intends to act as a marketplace, connecting end users to app developers who can share their apps (and recruit beta testers) — all before they ever bring their app to the iOS App Store, Google Play or the Windows App Store.

Again, why? Hey, says PreApps CEO Sean Casto, there are plenty of sites and platforms where people who love entertainment can preview the next big movie, song and video game. So, now that apps have become a thriving economy, why not give users a place where they can check out the best upcoming apps? Fair enough.

However, if this is such a great idea, why doesn’t the “Preview App Store” already exist? Casto says that he thinks it’s partly due to the fact that the real inflection point in mobile growth has — in the big picture — happened relatively recently. Plus, the growth of the iOS and Android platforms in tandem with their app stores make them pretty daunting to go up against. 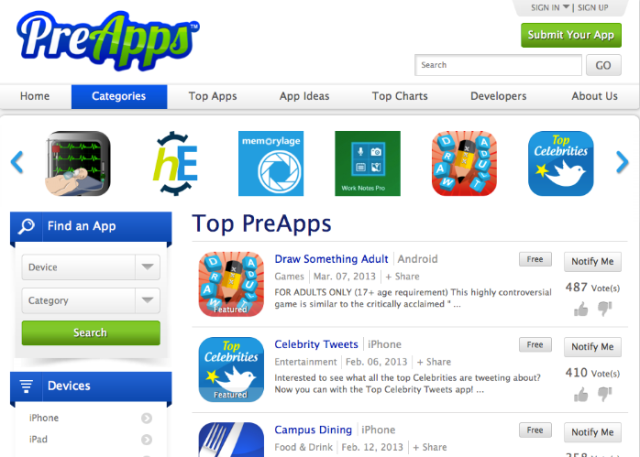 Not to mention the most important part: If you’re going to build another app store, you have to provide a big value-add for both end-users and developers. No easy task, but the PreApps team thinks that by offering developers a place where they can build a following and a brand, gain followers, fans and beta testers — before they even launch on the App Store — makes them far more likely to make money once they get there. Basically the mantra is “start earlier.”

Like Google and Apple’s stores, PreApps lets developers post their apps, which are split into categories, Top Apps, and so on. Each app gets its own page with a description, pricing, expiration (or release) date, screenshots, social sharing, videos, comments and suggestions. Developers can even post polls to ask their users if they like certain tweaks or updates.

In turn, end users get to check out these apps pre-release (so they can feel exclusive), get notifications when there are changes or the app is released and they can become a beta tester. There’s a handy “Become A Beta Tester” button right under each app’s icon, which allows you to send basic info directly to developers, at which point they can send you their beta download, and the rest is history.

Yes, in a way, this is just a different way of packaging a beta-testing service for app developers, something that’s not entirely new. (See BetaBait for example.) So PreApps wants to go beyond that and become a big ol’ developer resource. It’s primarily targeting younger people, like those in college or those developing apps for the first time — although it’s trying not to limit its scope.

But, if developers need help with engineering, with finding the right ad networking, designing in-app purchasing tools, creating an icon or producing a demo video, PreApps wants to help. For a fee, of course, which will likely be the startup’s core revenue stream — as all beta testing is free. (The prices listed on app pages just shows how much they’ll cost when they go live.)

The co-founders hope that by working on SEO, enabling developers to get early users sharing their apps on social networks and, really, in helping them produce a better product before their app goes live, they’ll be able to win over at least some of the masses. The value proposition for app developers is more clear than it is for end-users, however. I’d love to be able to check out some cool apps before they hit app stores and be involved in the beta-testing process, but that only goes so far. 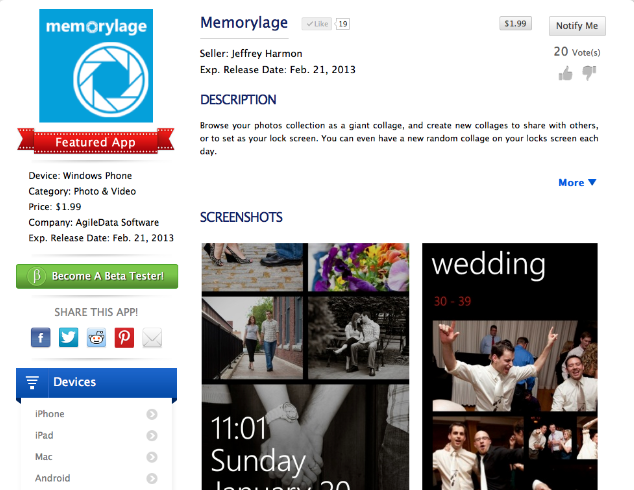 To really build traction, PreApps is going to have to secure partnerships with one or two of the biggest app stores (not necessarily an easy sell, though the co-founders tell me they are currently in talks with one) and some of the most well-known app developers. The question is whether they can create enough value and a big enough distribution channel that the Rovios of the world can’t help but pre-launch on PreApps.

“Our vision for PreApps is to forever enhance the relationship between mobile app developers and mobile app users, which will in turn create better apps,” says Casto. “By implementing user feedback in the development process, apps have a greater chance of success and for users a more enjoyable experience.” That is true, and it’s a noble (and important) mission, and I hope it’s successful in that mission. But it’s got a long road ahead, that’s for sure.