In a statement filed by former Palm head Edward Colligan, new evidence has come to light about the prevalence of no-hire agreements. Colligan, while staffing up his company, approached Apple employees to work at Palm.

The trend during those years – and the trend continues, to a lesser extent, today – was to lock employees down and to offer handshake agreements not to poach employees. Why? Presumably Apple in 2007 was a hotbed of innovation while Palm was also spinning up its handset division in anticipation of models like the Palm Pre. Defections would have drastically affected various parts of these companies.

Steve Jobs wanted none of it, noting that Palm was actively recruiting as opposed to allowing employees to defect of their own volition: 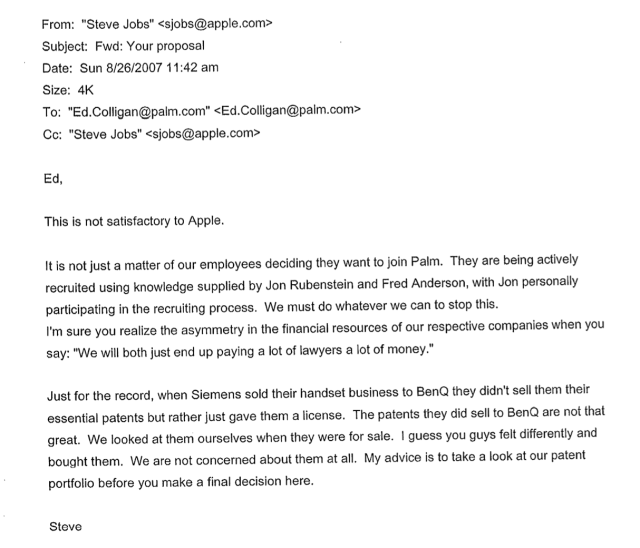 Other documents made public by U.S. District Judge Lucy Koh in San Jose, California brought other no-hire deals to light from Adobe, Google, Foxconn, and Pixar.

This behavior resulted in employees being unable to move between companies and many of these “no-hire” agreements are now the basis of a class action lawsuit that could cost Apple and others millions. It’s a messy business all around.

On one hand, it’s easy to understand why these letters went around. High tech employees are hard enough to find in the world at large, let alone at Apple. By agreeing to stop poaching each other’s employees, Apple, Google, and Palm could keep working on their own projects without fear of losing key people.

Sadly, it’s the employees who lose when no-hire pacts are in place and, as evidenced by these papers, some CEOs treated workers more like indentured serfs than people.