Today, the streaming music startup Serendip is bringing its “lean back,” serendipitous music discovery service to mobile with the debut of the Serendip iOS application. Like the web version which launched last fall, the new app offers a continuous stream of the music popular among friends, or others you’ve dubbed your “music soulmates.”

However, unlike on-demand services like Rdio or Spotify, for example, which also offer this level of social insight, Serendip aggregates music from YouTube, Vimeo, SoundCloud and Bandcamp to create its playlists. That puts it more in the same camp as startups like This is My Jam or Musicplayr, perhaps. Today, the company reports its catalog has over 50 million songs, and continues to grow.

Also unlike those in the streaming music space, which have you build radio stations based on artists you like, Serendip is focused on helping users find new things to listen to, even if they’re not quite sure where to start. To do this, the service tracks what music is trending on Facebook and Twitter in order to play the most popular tracks. Or, as the company describes it, it’s the “sound of now.” And if you find that some of your friends aren’t into the same music as you are, you can just unfollow them. 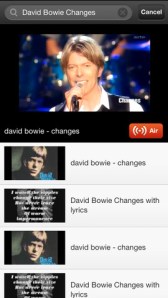 The service also recommends a few “DJs” upon first launch (there are over 15 million of them!), to help you get going. And as you get more into using the app, you’ll come across others with similar music tastes, and you can then follow their music which becomes a part of your own playlist.

As you listen, your playlist from DJs and friends is updated in real-time, and you can give the DJ a “rock on” (basically, Serendip’s take on the “like/love” button) or you can share the track out to your own followers so it ends up in others’ playlists, too. You can also optionally post your love for a track to Facebook or Twitter. Because some of the songs are sourced from video sites, those videos will play right within the app, which is another fun feature, which sets it a part from many radio apps in the space.

Asked how Serendip compares to the competition, co-founder Sagee Ben-Zedeff says, “our playlist  is not boring and predictable, because it is curated by people…the ‘curated by humans’ part may resemble turntable.fm or Songza, but it is done on a much larger scale, and at your convenience (you are not dependent on others to use the service at the same time),” he adds. “And we let you control it, and move across your feed so you can freely explore and enjoy the music the way you like.”

The company behind the new app, Serendip Media (which we spotted back in September hanging out at TechCrunch Disrupt’s Startup Alley), was founded in 2011 by Ben-Zedeff and Asaf Atzmon. Based in Tel Aviv, the startup has $850,000 in seed funding from Gigi Levy, The Jeff Pulver Micro Angel Fund, Yossi Gofman and Tron Capital, and is now raising.

The new app is available here in the Apple App Store.