The ability to create virtual, disposable phone numbers is paving the way for a new wave of startups, from those attacking the BYOD (bring-your-own-device) trend at work like SendHub, to apps like Burner for iOS, which offers the privacy of a temporary number without the need to buy an actual “burner” cell phone. Today, another new application called Hushed, somewhat along the lines of Burner, is making its debut on Android first. But this time, the startup is offering support for over 40 countries around the world.

The Hushed app, live now on Google Play, is a fully integrated voice client for Android phones, which allows users to buy a 7-day, 30-day or 90-day phone number. Each number comes with incoming and outgoing capabilities as well as voicemail, making it a viable, more lightweight alternative to something like Google Voice, for example.

Numbers start at $1.99, and co-founder Justin Shimoon tells us that the company felt it was important to keep the pricing transparent here. “The problem with credit-based systems [in other apps] is that you don’t really know what you’re getting,” he explains. “What we’ve done is show you the pricing. Here’s the price, here’s what it costs. If you buy a prepaid plan, you get a certain amount of minutes and text messages. If you don’t want that, you can buy pay-as-you-go,” he says. 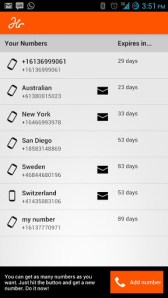 Burner, a current leader in this space (with a great name, too), raised an angel round  this fall from 500 Startups, David Cohen, Kevin Slavin, Ted Rheingold and others. But Burner is limited to North America – primarily the U.S. and parts of Canada. In comparison, Hushed works at launch in the following regions:

Shimoon says that more regions will be added in time. The system is built on top of the Twilio platform using the Twilio Client Android SDK, so the idea is that it will roll out wherever Twilio works. The international support also means that the use cases for Hushed are a bit broader than with Burner, perhaps, which claims its app is “perfect for dating, job searches, short-term projects, Craigslist, Twitter, Tumblr, and other social media,” or any other time you don’t want to use your real number.

Hushed, however, can provide access to local numbers for those who don’t actually live in the country. “If you’re in Greece for a month, buy a number,” Shimoon suggests, noting that Hushed works well from travelers.

He adds that the company has plans to expand upon its current feature set to offer users “line credits” for downloading other developers’ apps (a pay-per-download system), which would allow users who might not be able to afford paying for a virtual number another means of getting one. Other forthcoming features include voicemail transcription and voicemail forwarding to email, and the ability to purchase calling cards directly within the app, starting with U.S. calling cards first. An iPhone version of Hushed is also just a few weeks to a month away.

Shimoon says the company decided to go with Android first, because it was an underserved market and was more popular internationally. “There was not a notable competitor in [Google Play],” he says. The app, which launched just yesterday and has done no marketing or press until now, has over 2,000 downloads in the first 24 hours.

The team began work on Hushed around five months ago, but the company backing the app was founded three years ago. It originally focused on another product called Dazzled which would have been for optimizing products for online retailers, had it launched. The reason for the course change, Shimoon says, was simply the market opportunity. “It was opportunistic. There was real demand,” he says.

Based in Ottawa and co-founded by Shimoon and Timo Mika Glässer, the five-person team has raised just over a million from angels and strategic investors around the globe.

The Hushed app is a free download here in Google Play.