Video distribution platform Ooyala wants to make videos available wherever users may be. That means enabling its customers to distribute their content onto all sorts of mobile phones and tablets and connected TVs and crap like that. But it also means distributing video directly into platforms like Twitter.

Since Twitter released its Cards API, enabling publishers to add additional media — like photos, and, uh, video, among other things — Ooyala has been working to integrate it with the company’s video platform. The idea is to let publishers quickly and easily add embedded videos to their tweets. 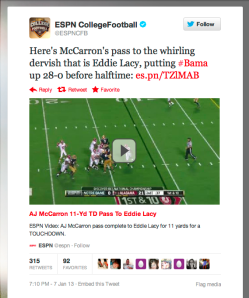 According to Brian Theodore, group product manager at Ooyala, ESPN will be using the platform to post highlights and other short-form videos to its Twitter stream. Doing so will enable it to take advantage of the real-time nature of conversation that happens during live sports. Like, for instance, this video embedded into ESPN College Football’s Twitter Feed.

Now that all the hard work is over, ESPN won’t be the only Ooyala client to take advantage. The company is offering an SDK to clients for free, so that they too can connect with the wonder that is Twitter. And that means that if you’ve ever wanted the power to watch an ESPN video directly within a tweet, you’ll now be able to do so — thanks to the power of Ooyala’s video platform.

The Ooyala-Twitter integration not only lets publishers embed videos in Tweets that can be viewed on Twitter.com, as well as various apps and its mobile web site, but it also provides monetization and deep analytics. That includes ads that can also be embedded in Twitter streams, as well as the ability to drill down and see which devices and apps were used to access videos embedded in tweets. There’s also a content discovery piece, as Ooyala videos in Twitter can provide recommendations for other related content.

For users, that means more places and ways to find and watch videos that might be of interest to them. And for Ooyala clients, it means bigger possible revenue streams as more video is consumed.