Android smartphones, led by Samsung, were the overall winner in the crucial holiday sales period at the end of last year, although Apple’s iPhone continues to shine in the U.S. as well as Japan, according to the latest numbers out from Kantar Worldpanel Comtech, a division of WPP that tracks handset sales in a number of key markets over a rolling, 12-week period. It also found that while handsets built on Microsoft’s Windows Phone OS continue to struggle in important markets like the U.S. and China, they are showing small signs of growth in Europe — although we’re still talking about single-digit percentages in almost all cases.

Overall, smartphones continue to grow in usage with ever more countries approaching a tipping point for a smartphone majority. Kantar told TechCrunch that the UK has the highest smartphone penetration of any market covered in the survey, at 61%. Australia is second-highest at 54%, with France in third at 46%. The rest of the penetration stats run down as follows: Italy and Spain both at 45%; U.S. at 42%; China at 39%, Germany at 38% and Japan at 24% (perhaps a consequence of Japan having a lot of early adopters of non-smartphone data-friendly devices).

The top brand here continues to be Samsung. Dominic Sunnebo, global consumer insight director for Kantar Worldpanel, told TechCrunch that it accounted for a full 43% of handset sales in the top five markets in Europe (UK, Germany, France, Italy and Spain); 27% of all handset sales in the U.S.; 32% in Australia; and 23% in Urban China; but only 6% in Japan. Across all nine major markets in Kantar’s research, Samsung took a 27% share of sales.

Meanwhile, Apple continues to remain strong in certain markets, including the U.S. On the strength of the iPhone 5, Kantar says iOS took 51.2% of all smartphone sales, a rise of 6.3 percentage points. In Japan, the gap between iPhone and Android devices is perhaps the biggest of all, with iPhones taking 66% of sales to Android’s 32%. (No comparative numbers since Kantar only started tracking Japan in the middle of last year.)

Kantar believes that Android may be approaching a degree of market saturation. That could spell one of two things: either overall saturation, with far fewer people in general buying smartphones (bad news for all manufacturers); or Android-specific saturation, with consumers now hunting out the ‘next big thing’ (which could spell good news for those like Microsoft hungry to pick up more market share).

Kantar seem to believe we are going to see more of the former, not the latter: “At the end of 2012 the global OS picture shows Android on top, but clearly the rate of growth it experienced over the past year is beginning to slow as easy wins from first time smartphone buyers begin to reduce,” noted Sunnebo.

With Windows Phone, a large part of its growth in Europe is down to Nokia’s remaining brand strength in these markets. Italy was one of the last holdouts for Symbian users — this time last year a full 20% of all smartphone buys were still Symbain devices in the country, although that’s dwindled down to 5% this year. But this also has meant more natural transition for Nokia lovers to Lumia devices, which are being sold at a range of high and low price points. This is a sign that perhaps Nokia should have tried to move even faster in its switch away from Symbian: it may have launched the Lumia too late in its erosion cycle.

Still, overall Windows Phones only accounted for 5.4% of sales in the region.

More importantly, Microsoft (and Nokia) appear to be making very little headway in the world’s two biggest markets for smartphones, the U.S. and China, where its performance, Sunnebo writes, “remains underwhelming.” In the U.S. Windows Phone was a paltry 2.6% of sales; in China (where Symbian was once king) it was less than 1%. Understatement alert: “These remain key challenges for Microsoft to overcome during 2013,” he writes.

Kantar also broke out some numbers specific to the UK market, which now has a smartphone penetration of 61%. In the UK, Samsung is just ahead of Apple on the brand-to-brand sales comparison, with Samsung taking 35% of sales to Apple’s 32%. Nokia, meanwhile, is “experiencing something of a turnaround”, writes Sunnebo. Yes, it only took 6.2% of sales (combining Windows Phone and Symbian sales), but that’s a rise of 50% over the same period a year ago. RIM, meanwhile, has continued to feel the pain of slow sales of its current stock — now weighed down even more by those who are committed to RIM holding off until the release of BB10. BlackBerry devices accounted for only 6.4% of sales. 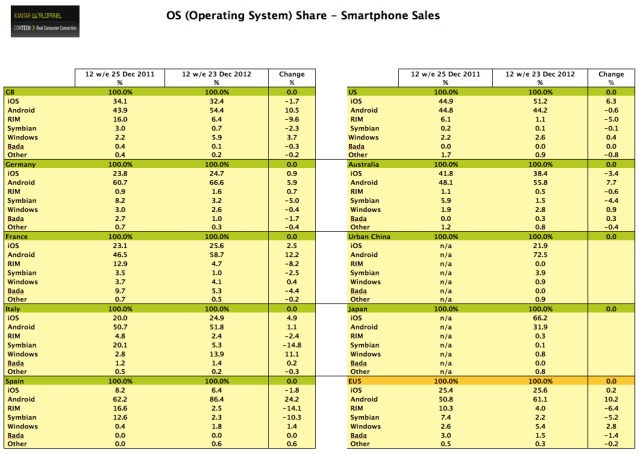