At the DLD conference in Munich today, Henrique de Castro, Yahoo’s new COO and Google’s former president of partners business solutions discussed the state of the web today and his vision for its immediate future. Sadly, de Castro argued that he couldn’t really talk about Yahoo itself, given that he’s only been there for eight weeks now. Still, his ideas about the future of the web itself can probably provide us with some hints about Yahoo’s future, too.

Looking back, de Castro argued that Web 1.0 was obviously a great revolution, but at the time, content was still missing. Publishers then started putting their content on the web, but they still came from the old print world (hence the word ‘pageview’). “That was good, but the web didn’t have enough content. As the web created more content, the container got very, very stressed,” he said, eventually leading to the age of the portal. 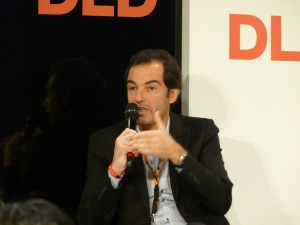 After portals, we arrived at the age of the search engine, which “segregated the container,” allowing users to create their own experience. That, however, de Castro argued, was also not a great experience, because you had to go out every day and find what you wanted every day. On the other hand, though, this change lead to a massive increase in content being produced.

Now, we are in the age of the social web, said de Castro: you can find everything you want and you and your friends can share it with each other. Here, he says, we are obviously still at the beginning.

“The future of the web is going to be completely different from what it is today.”

Looking ahead, de Castro says the future of the web is going to be completely different from what it is today. The future of the web will be based on three premium content, aggregated content and user-generated content. Text, image and video will live on the same platforms, he argues, and over time this will all converge.

With this, we will also see increased personalization: the container “you,” as de Castro called it. “My web is going to be different from your web. That container will aggregate text, images and video, premium content, aggregated content and user-generated content,” he argues.

This also means portals (like Yahoo) will have to evolve and start focusing more on personalization and with this, advertising will also evolve and become far more personal . Native advertising, it seems, is something de Castro is rather bullish about as “hammering the consumer” with today’s brand ads just isn’t working all that well in his view.