One of the most important roles that technology can play in transforming education revolves around data. Whether that’s by implementing APIs to make student data more transportable (à la Clever and LearnSprout) or creating integrated, cloud-based analytics platforms that give educators more insight into student performance through real-time metrics, finding better ways to make data more accessible can solve some of the biggest problems that are crippling our educational system.

Today, many educators agree that the educational process relies too much on end-of-the-year or end-of-term assessments and standardized testing, and, instead, needs a better way to assess their students’ mastery of the material during the term so they can make adjustments on the fly rather than at the end of the term when it’s too late. MasteryConnect launched in July 2011 to help solve this problem by offering a cloud-based platform that allows educators to track student progress through their mastery of Common Core standards.

The Salt Lake City-based startup focuses, particularly, on formative assessments — a type of assessment that involves qualitative feedback (instead of relying on scores) and takes place during the learning process, with the goal of helping educators tweak their activities and approach to teaching with the goal of helping students learn more effectively. MasteryConnect, then, makes it easier for teachers to create these types of assessments and share them with colleagues, parents and students.

MasteryConnect co-founder and CEO Mick Hewitt tells us that another important part of the startup’s mission is to help teachers, parents and schools understand the Common Core Standards, while allowing teachers to help drive the shift away from a situation in which students tend to be over-tested yet under-assessed. Hewitt, whose wife and father are both teachers, says that he hears time and again that teachers go into teacher-parent conferences wanting to explain why their son or daughter got a “C” grade in Math, and, while they can point to poor grades on homework or tests as a result, they still find it nearly impossible to explain which concepts or lessons they struggled with, which in turn led to the poor grades.

That’s why MasteryConnect created a widget that allows schools to embed Common Core standards into any website so that they can easily look up those standards and better understand the connection between them and the lessons they’re teaching (or learning) and the meaning behind them. In turn, the platform makes it easy for teachers to upload their assessments and answer keys, analyzing feedback from students through the browser or MasteryConnect’s app, which are then graded automatically.

Allowing teachers to drive the assessment process, doing so in the ways that they see fit while getting access to real-time results on those assessments, has led to some promising traction. Hewitt tells us that the startup’s iOS and Android apps have seen 500K downloads to date, and standards in these Common Core reference apps have seen 40 million pageviews. In turn, its patent-pending technology is now used by teachers in 7,700 districts across the U.S. — over half of the country’s 15,000-odd districts — and some 23,000 schools.

To support this growth — most of which has occurred over the last 12 months — the startup is today announcing that it has raised $4.1 million in series A financing, a round that will remain open for the next month or so, Hewitt says. Catamount Ventures led the investment, while the second-largest chunk came from the Michael & Susan Dell Foundation, with contributions from Deborah Quazzo of GSV Advisors and existing investor, LearnCapital. The new round adds to the $1.1 million in seed financing MasteryConnect raised from Imagine K12, NewSchools and Learn Capital, bringing its total to $5.2 million. 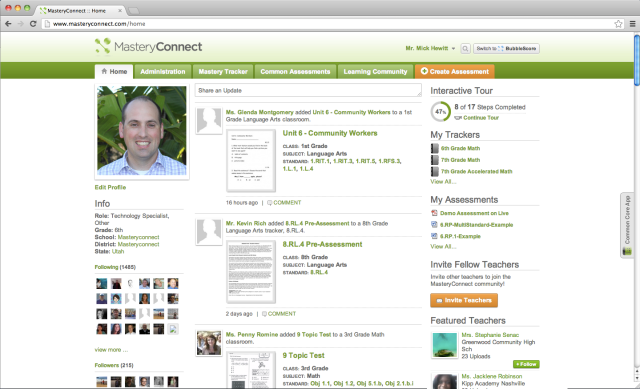 It tends to be unusual to see venture firms investing alongside non-profit foundations, but for Hewitt, it’s an important sign of validation. While the Dell Family Foundation has made a handful of investments in both non-profit and for-profit ventures over the last six years, this represents “the first equity investment for the foundation in a U.S.-based edtech startup,” Hewitt said today, echoing the company’s blog post on the investment.

As a result of the investment, the Dell Family Foundation required that part of MasteryConnect’s schools be low-income institutions. And while that could be seen as a handicap for an education software startup amidst a space that is traditionally rife with slow sales cycles, the chief executive welcomes the requirement, helping it maintain its focus on its core user base: the public school market, both low-income and otherwise.

Not only that, but MasteryConnect wants to help transform education in such a way that learning is driven by teachers and educators, allowing them to decide how assessment data is used in the classroom. Teachers are becoming disillusioned with the types of tests they’re required to administer by the state, with many of them believing that they are far from being the most effective way to measure progress. Instead, MasteryConnect offers teachers an opportunity to do away with the old letter grade standard, using its platform to track student mastery against Common Core or state standards as they go. For both teachers and students, that’s an exciting proposition.

In terms of its business model, MasteryConnect has opted for the freemium approach, offering free accounts to teachers, which allows them to access its Learning Community to find, share and collaborate on assessments, along with including basic grading functionality. Premium accounts, which cost $159/year for teachers or $6/year per student for an entire school or district, allow for more grading capabilities and integration with Student Information Systems, more robust collaboration and reporting.

Hewitt attributes part of the success of the platform thus far to this social component, which allow teachers to collaborate on the most effective ways to create formative assessments and discover which teachers, classes and students perform best under different teaching styles and methods of assessment. Traditionally, assessment in K-12 education has been driven by top-down models, with higher-ups in the district or state determining how testing will be structured, and on what content students will be tested, with pre-determined content from publishers driving the whole process.

MasteryConnect allows teachers to play a greater role in determining what content should be used and how it should be used, as well as test the efficacy of content and different styles in their own classrooms. While the startup is pushing a greater understanding of the Common Core within education’s ranks, it doesn’t play favorites or put any requirements on how teachers use these assessments. This, in turn, has led to the sharing of 25,000 different types of assessments by teachers via MasteryConnect, and, with its new funding under its belt and the ability to scale its own infrastructure, Hewitt sees a lot more growth in the future.

For more on MasteryConnect, find it at home here.