At the invite-only DLD (Digital – Life – Design) conference in Munich today, Codecademy’s co-founder and CEO Zach Sims talked about the history of the service, the way people are using it today and how he sees the company’s role to be in the quickly growing online education space.

Sims recounted the story of Martha, a Codecademy user in Kenya who barely had any experience with the Internet until she started her medical internship. During this internship, she finally got access to a computer and started using social media and began to learn from sources like Wikipedia that were previously unknown and unavailable to her. What really attracted her, though, was the fact that the Internet allowed people to create, so she started to learn how to code with Codecademy. Two weeks after she started, she quit her internship and focused on learning to program, which eventually landed her a job as a Ruby developer in Kenya. 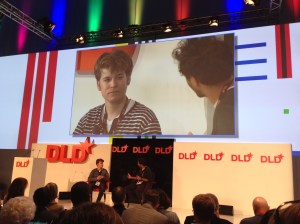 As Sims stressed throughout his talk, Codecademy wants to enable its users to create. Too many Internet users, he argues, just consume content and don’t know how to create it. “We all have the ability to create more and not just consume on the web.”

Codecademy, he said, wants to “build the educational experience the Internet deserves.” Asked whether what Codecademy built could apply to other disciplines as well, Sims argued that what made Codecademy work is the fact that it puts a focus on learning by doing and teaching skills that can be applied immediately. He also noted that one thing that makes Codecademy work so well is that it created a community of learners who can encourage and help each other by building their own lessons, for example.”You should learn anything interactively and in the company of your peers.” In addition, he also cited Codecademy’s recently launched API-focused classes as examples for this emphasis on teaching users skill they can immediately apply.

Sims also talked a bit about the experience of building Codecademy with his co-founder. Sims said that he always found learning to code hard, especially because he often didn’t find the right answers to his questions and a community of other learners. So when he met his co-founder Ryan Bubinski, the two essentially built the service for Sims himself. They developed the prototype in three weeks and Sims learned JavaScript to develop it. Shortly after they launched the project, thousands suddenly signed up and it quickly went global. Indeed, Sims believes that Codecademy has the opportunity to “build a global community of people who build things.”

As for other platforms like Udacity and Cloudera, Sims argues that they are cracking the distribution problem, but Codecademy wants to do something different. It wants to empower people to not just learn but to become teachers themselves (through, for example, Codecademy’s user-created courses).

Sims also had to face the dreaded question about how he plans to create revenue from the service, which is currently completely free. While he admitted that the service could at some point charge users upfront, he really sees it as his mission to lower the barrier for learning how to code and making a profit doesn’t really seem to be on the top of Sims’ mind right now.