Most clothing items companies give out to their employees make it outwardly clear where the person works (exhibit A.) It makes sense and all, but sometimes you don’t want to be a walking advertisement for your employer, especially if you’re in Silicon Valley and work at one of the most buzzed-about companies in the tech world. 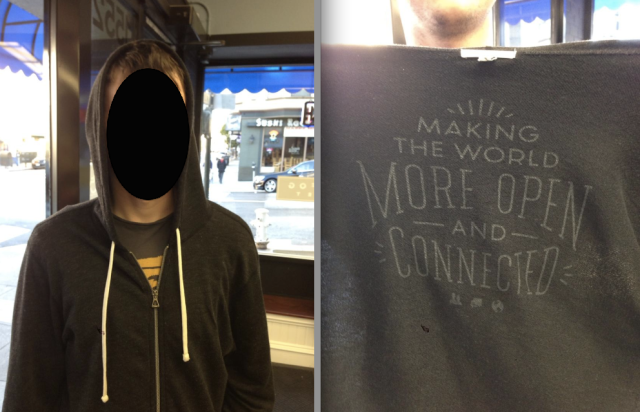 So Facebook’s new employee swag, pictured above on an engineer at the company, looks pretty awesome. It’s a hoodie, naturally, but it’s completely unbranded on the outside. On the inside, there’s a screen print of a Facebook’s mission statement: “Making the world more open and connected.”

I admit, that lofty-sounding raison d’être can be a little groan-inducing. But even so, the juxtaposition of wearing a hoodie (even if it’s an expensive James Perse one) while ostensibly doing world-changing work is a fun mix of high and low. It’s also a big part of the charm of today’s tech culture overall.

Image via TechCrunch COO Ned Desmond, who spotted the new swag in the wild this morning.