A friend of mine told me recently that he closed a $240,000 account. A competitor (let’s call it BigCo) was bidding for the business. I doubt that BigCo even considered my friend’s company (let’s call it SmallCo) a direct competitor. BigCo is a major player in their space and it raised a lot of money from good VCs and has a strong customer base.

SmallCo’s product doesn’t have a tenth of BigCo’s features. And yet in spite of that, SmallCo won the account. Actually, it was because of that.

As products mature, companies continue to compete in heated battles with their competitors by adding more features and more functionality. Investors and shareholders want to see steady revenue growth, so prices creep up. Yet, the truth of the matter is that a lot of customers need only a fraction of a product’s capabilities.  In fact, many of them would prefer fewer features because extra features tend to make products clunky and difficult to use. Still, companies become feature-producing machines.

As a result, what often happens is some small company comes out with a product that’s just good enough and just cheap enough for the lowest tier of customers and BigCos start losing business. BigCos console themselves by saying the customers weren’t all that profitable and that it’s too expensive to serve them.  And they walk away and focus upstream. SmallCos gets a foothold and releases a new set of features.  And the process repeats.

There are hundreds of examples. PCs disrupted mainframes exactly this way. Japanese cars and electronics disrupted American ones, only to be disrupted later by Korean companies and now Chinese companies. Merrill Lynch was disrupted by Schwab and then E-Trade. Phone companies by Skype. Visa and Mastercard by Square. Cisco was disrupted by WebEx, then acquired it, then screwed it up, then got disrupted by Citrix and LogMeIn. Smartphone cameras disrupted Nikon and Kodak. 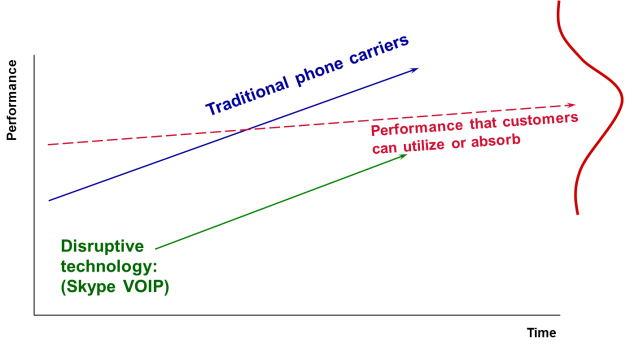 The process of Low End Disruption is beautifully described in Clayton Christensen’s series of books: The Innovator’s Dilemma, The Innovator’s Solution and The Innovator’s DNA. If you haven’t read them, you should. What’s amazing about these books is not only how important their conclusions are but how well researched they are. These are academic works of the highest quality (I should know. I studied under Jeff Dyer, who co-authored “The Innovator’s DNA”).

So why is this relevant to the deal that I mentioned above? Because I believe the process starts much sooner now. Companies that are barely out of the gate are getting disrupted. The rapid pace of innovation we are experiencing, plus the low costs of starting a company and the reasonable availability of venture capital, add up to a large number of startups fighting for survival in very close quarters. I found the following perceptual map of photo sharing services a couple of years ago. 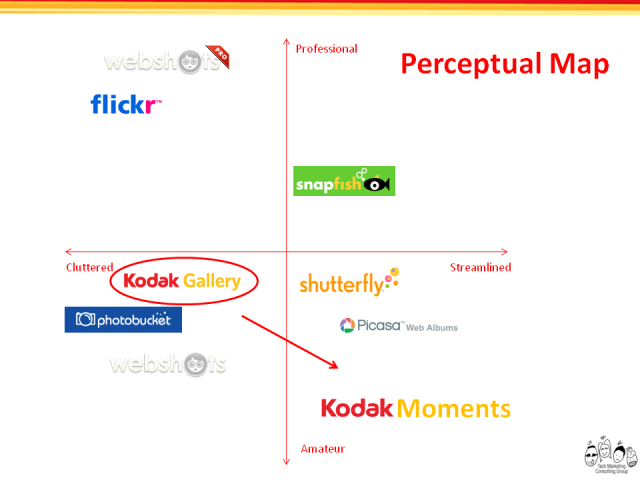 There are a lot of companies. But just think how many more aren’t on the map: iPhoto, 500px, Tumblecloud, Skitch and ACD. And never mind Facebook, Twitter and Instagram. All of them are differentiated – all of them have something unique – and yet I doubt that too many customers use more than one or two. And that’s when the trade-off happens. In each segment, customers tend to pick the one service that addresses their most salient need the best and other needs just well enough. Those who want to manage albums get Picasa.  Share with friends? Facebook. Mobile? Instagram etc., etc., etc. And now we have come full circle. In my view, companies of all sizes need to think about “good enough” competitors.

So what can be done about this?

There’s one other thing you should do as part of your go-to-market strategy. You need to very clearly identify an underserved (or over-served) market segment and make it your own. If you can’t find one that fits, INVENT one! At Influitive for example, we define our focus as “advocate mobilization.” And if that sounds strange, just remember that only a handful of years ago when Eloqua was founded, “marketing automation” sounded strange. Yet today, it is a whole industry with such great companies as Eloqua, Marketo, and ActOn leading the charge. Perhaps there’s an industry segment with your company name on it.