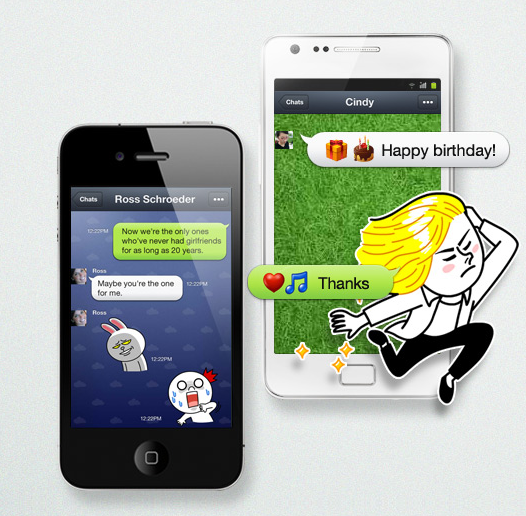 Line, a messaging app made by South Korea’s Naver Corp. that took off in Japan, just crossed 100 million users globally 19 months after it originally launched.

The app is one of the leading contenders in smartphone messaging in Asia and faces off against Tencent’s WeChat and KakaoTalk. As I’ve written before, when rumors emerged that Facebook was in acquisition talks with WhatsApp, global messaging is very fragmented with many players that do well in specific territories in Asia and Europe.

While Naver didn’t share details on daily or monthly actives, Line’s numbers put it up there among the top smartphone messaging players to watch.

Line gives you free voice calls (like Skype or Facebook’s new overhauled app). Then there’s basic messaging, but Line is a bit goofier with sillier emojis and stickers. There are teddy bears juggling eggplants, bunnies with flames of anger in their eyes, and a shy balding man surrounded by little sparkles and flowers. (Yes.)

Many are free, but some are paid — which is the secret to the app’s financial success. Naver last said Line was pulling in $3.75 million a month in sticker sales in July. But that figure is “a lot higher now,” according to Naver USA’s CEO Jeanie Han. She wouldn’t share figures though.

On top of sticker sales, there are a bunch of brand advertising revenue streams. Like Twitter, Line also has sponsored brand accounts where Coca-Cola can sign up for accounts that users can befriend or follow. Brands can also sponsor packs of stickers.

Like many other consumer mobile companies that have done well in Japan like GREE and DeNA, Naver wants to take Line global. It’s bringing the app to the U.S. and is signing up celebrities like Snoop Dogg to attract teens and twenty-somethings.

They just hired Han, who spent 10 years at Paramount Pictures, to run Naver’s U.S. office and expand Line’s reach in the U.S. They’re planning to attract new users through typical app marketing channels, but also through high-profile partnerships with celebrities and other brands.

Can it be successful, though? Facebook Messenger appears to be the leading standalone app in the U.S. by market share and active usage, according to some data I pulled from a mobile data compression company called Onavo late last year. That app appeared to be actively used by 11 percent of iPhones in the U.S. on Onavo’s network. On the other hand, a smaller percentage of smartphone owners in the U.S. regularly use messaging apps compared to people in other countries, the data showed. So perhaps there’s room for everyone to grow.