Governments hold a treasure trove of data that could be helpful to their citizens but they are not always entirely open to sharing the bits and bytes. But initiatives to open up government data have been gathering momentum. More good news today: Yelp is adding restaurant inspection scores to reviews on its business pages, initially for the cities of San Francisco and New York, but with a plan to roll the feature out to other cities where local authorities are open to working with it. Yelp said it has worked with local authorities’ technology departments in San Francisco and New York to import hygiene scores into listings.

The new feature will allow the latest hygiene score to be displayed directly on the restaurant listing — as a number out of 100 (as seen in this example listing below) — and will also allow Yelp users to click through and view the inspection history of an eatery before deciding whether they fancy its steak and fries. The broad point here is that useful government data becomes more accessible to the mainstream web user. 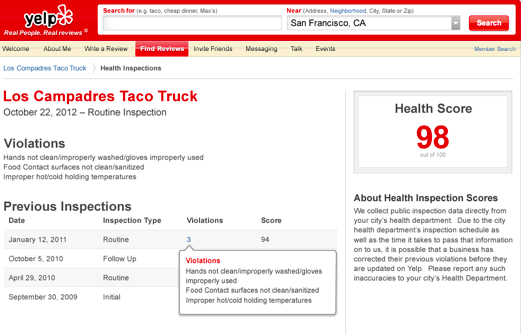 Writing in a post on the company blog announcing the news, Yelp said it has created a new open data standard called the ‘Local Inspector Value-entry Specification’, or Lives for short, which “enables local municipalities to display their hygiene inspection data as a business attribute on Yelp”. Being an open data standard, Lives could also be used by other sites to display restaurant inspection ratings for eateries — potentially widening access to the government data even further.

“We hope other cities will join San Francisco in fully embracing this new open data standard. If you work for a city hall and are interested in learning more about implementation, visit http://yelp.com/healthscores,” Yelp adds.

According to the San Francisco Chronicle, San Francisco will be the first city to get the ratings added to Yelp — due today — with New York following in a few weeks, and Philadelphia expected “soon thereafter”.