Advertising has been one of the chief routes for developers and publishers to make money from apps and other mobile content, but there is (literally) a small problem: Handset screens have a finite amount of space, so too many ads feels claustrophobic and crowded, and downright intrusive when you click on them accidentally.

On the side of ad providers and developers, working with the different ad formats and device formats can be cumbersome. LoopMe, a new startup out of London, is attempting to solve this with technology that does away with the noise of mobile ads by consolidating them into an “ad inbox” that you access instead through a small button.

The company has already attracted some heavyweight customers, and today it is announcing its first outside investment: a $500,000 seed round from a group of advertising and investing veterans. The round was led by Ballpark Partners’ Russell Buckley, the ex-MD of mobile ad network AdMob (sold to Google for $750 million), with participation from John Taysom (founder of Reuters Venture Capital), Torben Maajaard (founder of Ciklum and AdQuota) and Peter Barry (founder of Vodafone Ventures in Silicon Valley, and a past investor in mobile ad company Amobee, sold to SingTel for $321 million).

The co-founders, CEO Stephen Upstone and CTO Marco van de Bergh, both hail from Velti and used some of the proceeds of that company going public to fund LoopMe. In an interview with TechCrunch, Upstone said that the main purpose of selecting the investors it has was to “bring in expertise to help us grow.” That will include hiring more people and honing its technology, but also opening offices in Asia and the U.S. to bring in more customers.

That customer base has already picked up some steam since LoopMe officially launched in August 2012. Upstone says that it has over 100 advertisers right now, with mass-market brands, including Honda, Amazon, U.K. retailer Marks & Spencer, and several mobile carriers using its service. Apps that carry LoopMe’s “inbox” button include the Hobbit and FIFA football games.

I must admit I was a little skeptical at the thought that people would click on a small box in order to be served many ads all at once. The idea seems to run counter to a lot of what you see these days on the Internet, where ads are made increasingly hard to avoid. Upstone says that in fact it is the opposite.

“Five to 10 percent of people who come into an app with our inboxes will go into that inbox,” he told TechCrunch. “And that’s been pretty consistent.” And what they get when they go into the box is often a selection of offers, but with the officers all consolidated into a single screen, this appears to perform better than individual banners, he notes.

“Once you are in our inbox, response rates are 10 times better than straight banner ads,” he claims. (Typically, click-through rates on standard mobile display ads in mature markets is between 0.25 percent and 0.5 percent.) Once in the inbox, users can vote ads up and down to note which offer the best bang for your viewing buck. Over time, Upstone predicts that this will also help with engagement. A walkthrough of how it works is below.

Perhaps because Upstone knows all too well that digital advertising often follows the law of diminishing returns — the more ads that are out there, and the more people become accustomed to them, the less they click — LoopMe is trying to take a very different approach to the medium:

“It’s about respecting the consumer first so that we have a business in 5-10 years time,” he says. “We do not want to bamboozle consumers, but create a loyal group of users. As they get greater confidence in the ads we offer, the overall quality of what’s in there will also get stronger. We’re talking about a paradigm shift in advertising here.”

In this, LoopMe is not alone. Companies like Kiip — the mobile ad network that is based around rewards — is also trying to use the medium of mobile ads in a more engaging and more customer-focused way. Their message is clearly speaking to the wider ad industry, with Interpublic just today coming forward as one of the startup’s strategic investors.

Although LoopMe serves the ads through these inboxes, Upstone does not call the company an ad network. Instead, he describes it as an “ad tech provider” and creator of a “new ad unit.” Part of the advantage of that is that this leaves the door open for LoopMe to integrate with other ad networks as it continues to grow, and those networks continue to seek out new formats that keep developers embedding and consumers clicking. 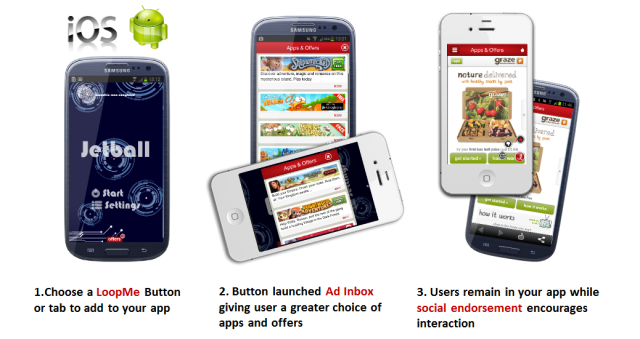