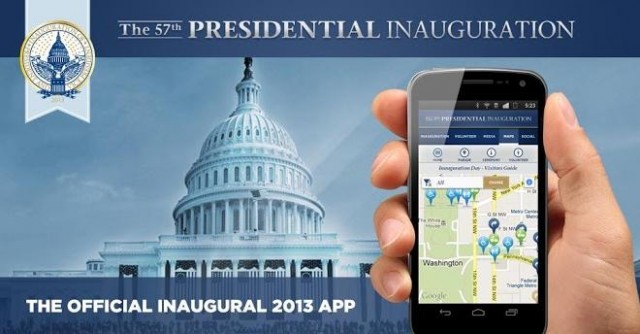 [Update: A PIC member has alerted to a Washington Post piece that clarifies that app’s data use policies.] Watching the live stream of President Obama’s inauguration on the official smartphone app could make you a lucrative target for liberal spam. Buried in the terms of service for the widely praised and gorgeous Inaugural 2013 application is permission for the non-partisan Presidential Inaugural Committee to share data “with candidates, organizations, groups or causes that we believe have similar political viewpoints, principles or objectives,” according to Politico.

“It seems like classic bait-and-switch,” said Kathy Kiely, managing editor of transparency watchdog, the Sunlight Foundation, “This is a committee that’s formed to throw a celebration for an event that should be nonpartisan. Theoretically, the whole country should be involved. It’s a patriotic, banners-and-bunting and parades kind of day. And oh, by the way, if you use this app, we may be harvesting your emails and sharing it with our friends in the Democratic Party.”

The app’s minor obsession with collecting telephone numbers, GPS data, and permission for notifications are all perfectly justifiable to help crowds navigate the chaotic and event-filled occasion. But, privacy advocates find it troubling that the fine-print on the PIC’s website says it can use activity data “without limitation in advertising, fundraising and other communications in support of PIC and the principles of the Democratic party, without any right of compensation or attribution.”

In an email to Politico, PIC spokeswoman, Addie Whisenant, explained the data mining policy, “Regardless of party, it is appropriate for a presidential Inaugural Committee to support and reflect their party’s ideals and causes.”

All of this hand-wringing could be over-hyped, but it would be difficult to track if users actually get put on liberal donor lists. The fact that the PIC hasn’t categorically denied efforts to hock spam at users is certainly troubling.

Its too bad, too. The Inauguration app is positively gorgeous. The navigation, layout, and features are all top notch. It’s like a sexy spy–a sexy, sexy, spammy spy.