Europe’s state railways continue to pick up steam in their lawsuits against Apple. Today, it emerged that Russian Railways has filed a trademark lawsuit against the iPhone maker, suing for 2 million roubles ($65,000). The reason is still not entirely clear: the public statement released by the RZD (Russian Railways’ abbreviation in Russian) only notes that the infringement relates to the RZD registered trademark, certificate number 341333, and the use of it in the “online Apple Store” in pictures. This may have to do with third-party apps in the App Store that use Russian Railway’s logo without permission.

Here is how the icon for one of those apps, a cargo tariff calculator for shipments on the railway, looks: 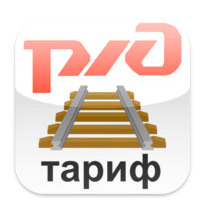 Russian Railways’ logo is illustrated up above.

The Russian news agency Ria Novosti notes that the suit is valued at 2 million roubles ($65,000).

“RZD intends to protect its intellectual property, especially since the trademark is well known in the Russian Federation,” Russian Railways notes in its statement (in Russian).

This story is reminiscent of two others in Apple’s iPhone history. The first is from last year, when Apple was accused by Swiss Railways for copying its clock design in iOS 6. That was eventually settled with a licensing agreement, reportedly worth some $21 million.

The second goes back a bit further: in 2009, Cartier sued Apple over a couple of apps in the App Store that used its logo without permission. It withdrew the suit, however, after Apple pulled those apps. If this is another case like Cartier’s, it’s likely that it should get resolved with relatively little pain, unless Russian Railways is feeling litigious and wants to put the IP pedal to the metal.

We have reached out to Apple for comment on this and will update as we learn more.