According to new data released from KinderTown, an educational app finder for parents of preschool and kindergarteners, Apple’s new iPad mini showed a drastic increase in usage among its app’s install base after the holidays, suggesting that many parents purchased the new tablet for their young kids this season.

The data was recently pulled from the app’s over 200,000 users, which is decent sample size to draw some insights about the new devices, in terms of their use by children. KinderTown’s app, for those unfamiliar, offers an alternative Apple’s App Store that only features kid-friendly apps vetted for their educational value, and which can be further refined by age, category and price. Because parents use it to find and buy apps for their kids, it’s generally installed on the device the child or children in the family use.

Although normally, the percentage of KinderTown users on a specific device rarely changes week-to-week, the holiday period following Christmas was not what you would call a normal week, the company tells me. After the year’s biggest gift-giving day, the iPad mini showed a drastic increase. Of course, this would be expected upon any new device launch. 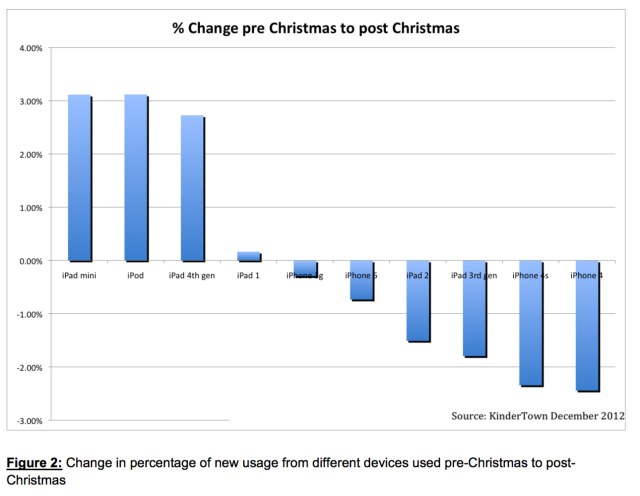 In further examining the data, it was clear that the iPad mini wasn’t the only big gainer – the latest iPod Touch (4th or 5th gen) and the new iPad (4th gen) also saw big boosts during this time. But of the three, KinderTown’s parents were clearly choosing the iPad mini over the new iPad for their kids. The company notes that there’s also some indication that older iPads are passed down to the kids as mom or dad get their own new devices, as evidenced by the increase in iPad 1 usage after the holidays. 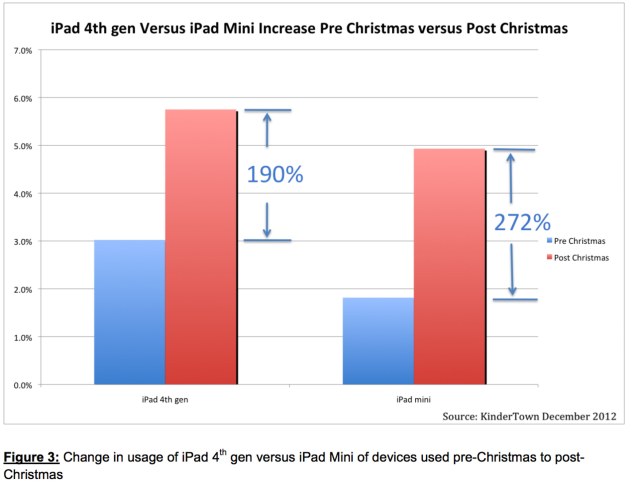 In the chart below, you can see that KinderTown’s users still preferred the latest iPad over the iPad mini, in total. The post-Christmas breakdown was 5.8% and 4.9% of users, respectively. But since the iPad mini’s usage increased by 270% after the Christmas, compared with the iPad 4th gen’s 190% increase, the company says it believes the minis are being purchased at a faster rate. 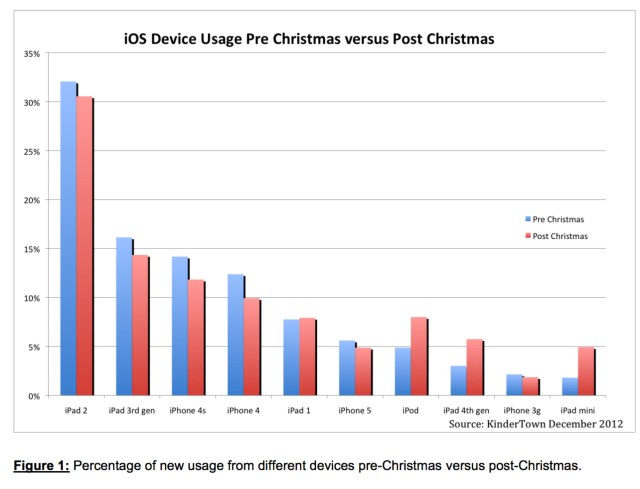