Facebook launched Graph Search today, its own version of a private, personalized social search engine. It’s somewhat of a competitor to Google’s “Search Plus Your World” – Google’s more recent take on blending personal data with that of the greater web. Although Facebook CEO Mark Zuckerberg was careful to frame it as not being a web search product, that statement was not entirely accurate. It is web search, after all – it’s search and it’s on the web. It’s just not web search as we know it.

Don’t be mistaken – these two companies, Google and Facebook, are now battling for your private data, and to some extent they’re both betting on personalization as the future of search.

Facebook, as we know, has over 1 billion users, and today noted that it has over 240 billion photos as well, and “more than a trillion connections.” In other words, it’s home to a wealth of private data, which Google can’t know about and index. A vast landscape built in Google’s blindspot. That’s a niche it would be dense to ignore obviously.

Whether that niche is the definitive future of search, however, is yet to be proven.

Facebook Graph Search, the company says, is rolling out slowly. It will leverage the social network’s own private data, honoring users’ privacy settings in the process of building this new search engine. Some things aren’t yet included, like individual Facebook posts and Open Graph actions (like song listens), the company says. But they’re coming. 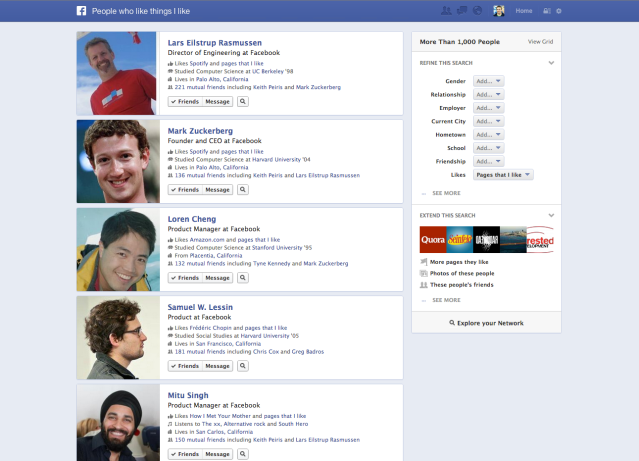 It will make Facebook far more usable, and will therefore suck up even more of users’ time from Google sites, which will be another blow to Google’s ads business.

Facebook users will be able to search for friends, photos, restaurants and businesses nearby, games and music friends play, photos friends like and more. Much of this you can do on Facebook today, it just hasn’t been well-organized. Facebook currently has a search interface, but Graph Search will re-envision Facebook Search for a more powerful combination of various search queries – “restaurants in New York liked by chefs,” “cities my family have been to,” “photos of friends from before 1999,” etc. Facebook Search is all about exploring your personal social connections, and those across Facebook. 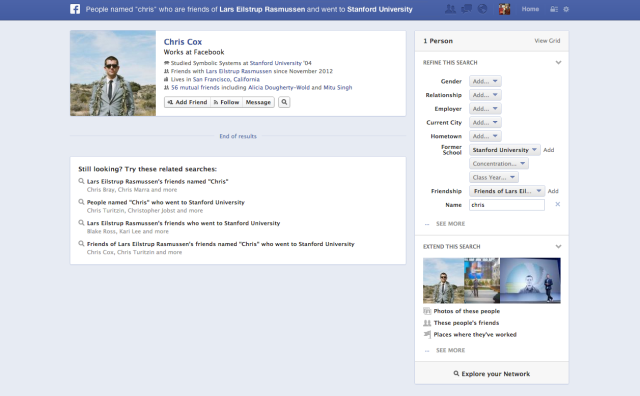 This is a major step forward for defining what Facebook is to users: a social network turned search engine. And while it’s true that Facebook has leveraged a wealth of private data to build its engine on top of, it’s not the only company which is capable of doing so. Yes, Google may be starting from the other direction (search -> social instead of social -> search), but it’s not powerless here, despite the giant, and growing, private web behind Facebook’s doors.

Google, too, has been building its own social graph of sorts for its user base. While those visiting the destination site Google Plus may chalk up Google’s social efforts as that of building a Facebook clone with a few Google-fied bells and whistles, like video Hangouts, for example, Google’s true social efforts lie in unifying its user data across all its properties and services. Over the past year or so, Google has shut down unnecessary and underused services (yes, including social search startup Aardvark!). It has combined its various user Privacy Policies into one, and have made users’ Google login the identification they use everywhere on Google from checking email to watching YouTube to searching for answers. It has streamlined Google and added a social layer to all of it.

YouTube is a pretty big social network, too, when you think about. 800 million monthly uniques. And Google hasn’t even fully realized the potential of switching on social on its mobile install base via Android.

The company has access to other private data, too, which recently became available for public search tests. In August, it began letting users search their Gmail messages using Google.com. Then in December, it enabled an opt-in feature that lets users search for their online purchases, reservations, and other events using Google.com. The trick here is being able to peer into users’ inboxes and identify messages like order confirmations and receipts. It only feels vaguely intrusive because we believe our email is private. It’s not.

And Gmail, one could argue, is a social network filled with far more practical data for searching than “which photos my friends liked.”

Yet when it comes to the less practical – those photos, for instance – Facebook has the clear edge: 240 billion photos is just massive scale. Google, meanwhile, has let its Picasa photo-sharing service stagnate, confusingly, while also offering Google Plus Photos in its main social product. It’s time that Google stepped up its game on this front, and began to merge the two properties properly, and transition users. (As a side note, Google offered instant (automatic, background) photo uploads from mobile a year and half before Facebook did. It also now has a dedicated easy upload app for YouTube.)

As for the other data – venues suggestions and recommendations, travel ideas, etc. – well, remember that Google bought Zagat in 2011. Yes, Google saw this whole thing coming. Who hasn’t? Google is still making good on that purchase, too, having only recently relaunched Zagat on mobile. It has also merged Google Places (its business listings) into Google Plus Local. In Google’s preferred vision of the future, you might search for a restaurant, dine, rate and review the meal, and pay the establishment, all on Google. This could happen. That’s a lot of proprietary data, too.

Perhaps the biggest reason of all as to why the search battle is just now beginning is because we don’t yet know that search built on social search will definitely win long-term. Does social show early progress, in terms of Facebook ads, and specifically Exchange Ads? Yes it does. Can it transition that to mobile? Also possible.

Social search, likes, recommendations, etc., however, are built upon a potentially flawed idea: that our friends know best. They do not. Not always. Some friends have different tastes, and different interests. And some have just poor taste, let’s be honest. Does the fact that a friend bought a G&E washer mean I should, too? (Maybe it was just on sale.) Does a friend’s check-in at Chez Louie equate to a recommendation? (Not without their accompanying rating or review. The food may have been terrible.) My friend went to Uruguay – should I consider that for my vacation? (They may have hated their hotel, who knows?).

A check-in, a place, a photo is not an answer. There’s more data needed here.

Then what about Facebook likes? Sadly, Facebook advertisers have corrupted that data – “like our page for a coupon or deal!” Okay, liked. Hmm, now does the need for a discount mean a recommendation for a brand, though? That becomes less clear the more promotions are run. 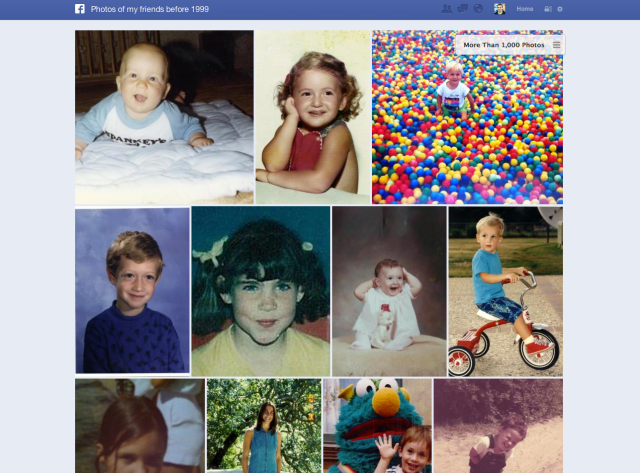 While building a graph around what our friends and networks are doing is an obvious no-brainer for Facebook, it’s not necessarily the “next new thing” for search. At launch, it’s just a better Facebook.

If social is not the future of search, or if it’s only one small part, where then, is search going? Real answers. Facebook alluded to this in its announcement, saying exactly that: Graph Search is about answers, not links. But it doesn’t yet really have all those answers.

Meanwhile, Google is building its own answers engine, too. It launched Knowledge Graph Search last year, which now delivers answers to fact-based questions. It also launched a predictive, personalized search interface called Google Now on mobile, which knows what you need to know…and before you know you need to know it. That’s pretty disruptive.

In other words: Facebook is a welcome entrant in search, but the games aren’t over just because it finally stepped onto the field.

Check out more of TechCrunch’s coverage of Facebook Graph Search:

If It’s Not In Graph Search, Facebook Hands Your Query Off To Bing

Zuckerberg Says “I Would Love To Work With Google”, But Bing Was More Flexible On Privacy

Graph Search Ads Could Be A Goldmine For Facebook

What Can You Search For On Facebook Graph Search?