Pulse, the popular news-reading app for the web and mobile, just announced that it is going beyond the standard news sources it currently features and adding authenticated personal social feeds from social sites like YouTube, Tumblr, Instagram, Flickr and Facebook to its app.

As Pulse co-founder Akshay Kothari told me yesterday, this is Pulse’s first real foray into social feeds. While Pulse already offered some aggregated social feeds from the likes of Reddit, Instagram (top photos), YouTube (top videos), Readability (top reads) and similar sites, this is indeed the company’s first attempt to focus more on authenticated personal feeds and, at first glance, marks a bit of a change for a company that is better known for its stylish presentation of news feeds from news sources across the web. 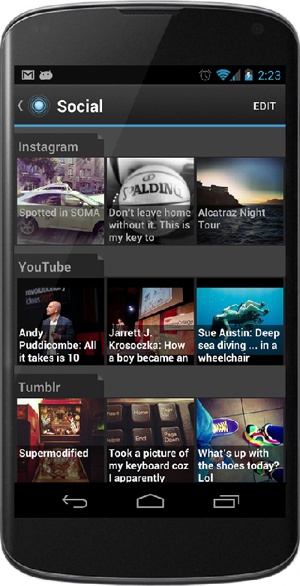 As Kothari told me, though, the original idea for Pulse was always to give its readers one page to see all their content and remove the need for them to go to different platforms to do so. Given that many users now go to the social web to find interesting content, it makes sense for Pulse to also move into this direction. While this definitely makes the service more personal, it doesn’t yet make it social. Pulse isn’t bringing in likes and comments from the social feeds it now aggregates, though the company will obviously iterate on its current implementations and may bring these features to the app later.

One nice feature of Pulse’s system is that users will only have to log in to their respective accounts once and their feeds will then appear everywhere a user accesses Pulse, including its recently launched web app. Pulse users will be able to add these social feeds from Pulse’s catalog, where the “social” category is also getting a redesign to focus on these authenticated feeds.

As many of these new feeds are heavily focused on images, the Pulse team also redesigned the photo- and video-viewing experience on the service to remove clutter and put the emphasis on the images and to “let those gorgeous snaps speak for themselves.”

One social feed that’s obviously missing from Pulse’s list is Twitter. As Kothari told me, there are two reasons for this. One is the simple fact that Twitter’s text-heavy feed isn’t ideal for Pulse, though he admitted that Pulse could aggregate links from a user’s feed and display them just like the other stories on the service. Pulse, however, is also worried that Twitter will continue to make changes to its API and that its integration could be short-lived.