The Minerva Project burst onto the scene last year with an ambitious goal: To create the next elite American university, online, and, in so doing, help rethink the role of higher education in the Digital Era. Not only that, but the startup wants to establish rigorous, Ivy League-caliber standards, admitting only the best and the brightest, with a faculty to match, while offering tuition that’s “substantially less than half” the price of today’s elite universities, according to founder Ben Nelson.

Given the current landscape, in which states are under pressure to cut spending, tuition costs and student debt are skyrocketing, class sizes are increasing, infrastructure is archaic and outcomes are suffering, it couldn’t come at a better time, yes, but it’s also an extremely tall order. Furthermore, while the company is full of exciting plans for what it wants to accomplish by the time classes begin in 2015, it hasn’t offered much in the way of how it plans to make them a reality. In fact, for all intents and purposes, Minerva has remained largely silent since its debut in April of last year.

But today, the company finally offered a first look into how it intends to attract and retain top-tier professors and students while keeping tuition affordable. This morning the startup announced the creation and launch of The Minerva Institute for Research and Scholarship, a non-profit organization that will help attract and direct financial support for its academic programs and for faculty research.

The Minerva founder says that the Institute is part of the company’s effort, in part, to re-shape the traditional university business model to make it more effective and efficient. Particularly, it aims to to this by providing additional means of recruiting talented professors, offering the funding that will both support their jobs in a challenging economy and allow them to pursue their own studies and research in their field of interest.

Nelson tells GigaOm that the other impetus for the creation of the Institute was to safeguard the R&D side of its university, providing a check that will make sure the for-profit university doesn’t end up profiting excessively from funding that should be put towards innovation and development. In principle, it sounds a lot like the The Wisconsin Alumni Research Foundation (WARF), a nonprofit organization that helps transform University of Wisconsin research into products that benefit society.

The separate, but affiliated foundation supports scientific and technological research by patenting and licensing inventions that come out of university discoveries, generating revenue which it then funnels back to the university. And it’s more than peanuts. To date, the organization has contributed more than $1 billion to the university through annual “margins of excellence” grants and other modes of funding. 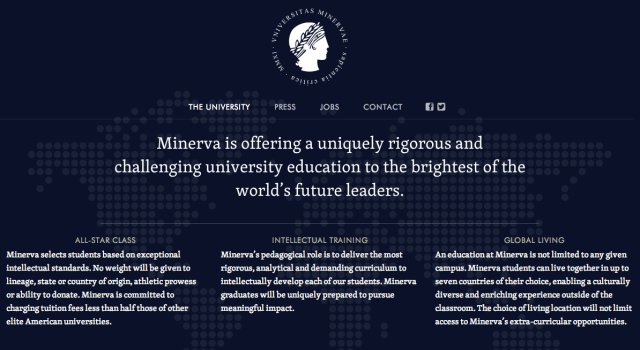 It’s a smart move, and one inspired by successful non-profit university R&D and investment vehicles, like WARF. In fact, the move has attracted another big-name to Minerva, as Bob Kerrey, former U.S. Senator and Governor of Nebraska, joins as the Executive Chairman of the Minerva Institute. Needless to say, this seems like a big victory for Minerva, as Kerrey’s political and governmental relationships will no doubt be of great value to an organization whose sole purpose is to build the financial resources that can sustain an elite faculty and cutting-edge research.

Kerrey also has plenty of experience in higher education, being the President Emeritus of The New School, where he served as president from 2001 to 2010. The former senator also joins former Harvard President and Treasury Secretary, Larry Summers, on the startup’s advisory board, and follows Minerva’s quiet addition of senior execs from Yahoo and Grockit to its (for-profit) leadership team.

Cheerleading it may be, but add the $25 million in seed funding Minerva raised from Benchmark last year (notably, in Benchmark’s largest seed investment to date), and one can understand why the new Executive Chairman is jazzed: “I believe the Minerva Project is the single most important innovation in higher education in my lifetime,” he said.

I, for one, am not as willing to get giddy with superlatives. Really, The Minerva Project was born out of the ongoing struggle to prove that online programs and institutions can provide a legitimate alternative to the traditional, purely-on-campus model — at a high level. But it’s far from being the first in this regard.

2tor (now 2U) was, in part, founded on the belief that online education has traditionally been of lesser quality, comparatively, because it isn’t striving to be great, defined instead comprised of a million crappy micro-correspondence courses and make-shift MOOCs. As one of the most-funded education startups out there, 2U has been partnering with graduate schools at elite universities to build legitimate online programs that allow institutions to offer the same rigorous standards for academics and admissions online as they do offline.

Capitalizing on the progress the 2Us of the world have been able to generate in higher education, Minerva — to its credit — is taking it one step further. Besides being built from square one around online resources and only going after the best and the brightest, Minerva is also looking to differentiate its model by eschewing federal aid. Nelson says that, in reality, financial aid only leads to higher tuition rates and restricts how universities construct their admissions policies.

So, in order to live up to its goal of accepting any student that lives up to its academic standards and its focus on building an international student body, Nelson tells GigaOm that Minerva will instead fight for favorable loan rates and create its own scholarship programs, which will allow it to avoid federal assistance.

Through its new Institute, Minerva also hopes to be able to attract top-notch faculty by offering incentives that are different from traditional universities. Because the university is online, professors can presumably work from any location, and if it’s able to secure funding, the opportunity for professors to lead teams of bright young students in R&D projects. Nelson also says that the Institute plans to let professors and students retain the rights to the intellectual property developed while at Minerva. However, it’s not yet clear how exactly it will approach tenure.

In the end, there’s a lot of friction working against Minerva in terms of attracting and retaining great talent, but the startup university has already begun to put some important pieces in place which could make its virtual campus an attractive alternative for the alternative-minded. There’s still a long way to go, and even if Minerva doesn’t fulfill its goal of becoming the next elite American university, the work it’s doing now could very well lead to a solution that will allow the liberal arts education to survive in an increasingly Digital World — without bankrupting those future generations of students.