The proliferation of organized “hackathons” has been a big story over the past few years. Quite a few developers that I’m friends with see them as a way to keep themselves sharp on their own products and ideas, especially when a different company is the one putting the event on. I recently attended, and judged, a Foursquare hackathon in San Francisco, and saw about 20 presentations from some pros and beginners alike.

Usually the participants hack away on an idea, or series of ideas, over a 24-hour period. During the hacking, teams are built, careers can be made, and new features and companies can be found if people are paying close enough attention. At the Foursquare hackathon, where the participants hacked away on Foursquare’s API, as well as some other sponsors’, I found the things you’d expect at a hackathon – stickers, beer, pizza and geeks.

After attending quite a few of these hackathons in San Francisco, New York City, Philadelphia, Seattle, Mexico and Israel, I’ve found that this is a great testing ground to get ready for pitching VCs for the product you want to spend all of your time working on. Most of the projects aren’t ready for prime time, but facing judges and an audience with a five-minute presentation is a great way to sharpen your pitch skills.

Some of these things might seem obvious, but they can serve as a reminder for you. 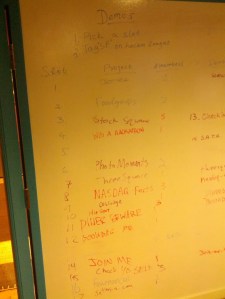 There are only so many hours in a day – and in a hackathon. Sometimes, you don’t get your project finished, and you go ahead and present anyway. That’s pretty cool, but it’s a good idea to focus on having something finished. Even if you have to divert from your original idea, showing something that works is putting your best foot forward.

If there are recruiters at the hackathon, they want to see nimble teams that can move and shake in any situation. Simply “running out of time” isn’t an excuse, it’s a hackathon after all, so hack your way through the stumbling blocks. Even if you don’t win, you’ll show your peers that you can get shit done.

At the Foursquare hackathon, there were a few teams that said that they didn’t realize how hard their idea was until the first few hours of hacking on it. When you say that to yourself, it’s time to start on something else, so have a few backup ideas written down before you get cranking. Having nothing to show for all of your hard work bums everyone out.

Explain exactly what it does

Yes, after 10 or 20 hours of coding, you might find it difficult to be coherent in front of an audience. Over the past few hackathons I’ve been to, I’ve witnessed teams trying to explain all of the technical aspects of what they just worked on, but the judges and audience just want to know what it does and then see it work.

If your idea and project is cool enough, you’ll be immediately surrounded by curious coders who’d like to hear about how you did this part or that part. Keep it short and simple, so everyone watching can “see themselves” trying out what you just made. This is what you need to prepare when you are ready to pitch a VC one day. If you can’t explain exactly what your “thing” does, you won’t make it too far.

Discuss who it’s for 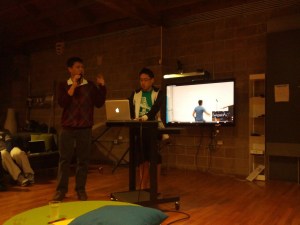 So you’ve shown your new app that uses the Foursquare API to show all of the ice cream stores in California with layers of weather information on top of it. That’s pretty cool, and it worked! The next thing that you have to explain is who this product is for. Is it for kids? Is it for ice cream enthusiasts?

Saying that the product is for “everyone” shows that you really didn’t think about it. Even Instagram had to think about who their app was for, and maybe it was for people who loved to take pictures but didn’t want to edit them. That simple explanation got them past all of the boring questions when looking for investment.

When you’re in a hackathon, you should be working on your pitch in parallel with the progress of your project. Your idea will change during the competition, and the pitch must change, too. Believe me, I’ve heard pitches that match a product that I didn’t see demoed. They probably wrote the pitch before they started coding.

Now that the judges and audience understand what you’ve created, who you’ve created it for, and seen that it works, they will want to know where you see yourself taking this. Basically, “What are the next steps?” At hackathons, I’d say that the answer is “we don’t know yet” about 75 percent of the time. While you aren’t expected to quit your current job to switch over to this new project, it is a good idea to have a prepared answer for this, or assert it during your pitch.

If you’ve created a fun game, maybe you won’t be doing anything else with it at all, and that’s okay. If you’ve created something cool that’s a feature, and not a product, maybe you can open source it and put it on GitHub for other developers to use. When you have an answer for that question, it means that you value your work.

How many hackathons is enough?

There’s probably no set amount of hackathons that you should attend before you venture out for funding or try to find a next job. If anything, it’s a great way to keep your coding skills in the now, keep updated on the latest technologies and nuances of popular APIs, meet new people and network a little.

At the Foursquare hackathon, where a team called Droptask won the main prize, I was on a judging panel with two very prominent VCs in Silicon Valley. Will this team get funded for the project? You never know. Maybe Foursquare might hire them for their own team. You won’t even know what could happen if you don’t step out and do something.

What does Droptask do?

You can connect your Foursquare account to the service, and based on where you are, you can assign tasks or accept tasks based on what you need and where you need it. For example, you could be checked into Starbucks, and someone could set up a task to hold a place in line for them. You could accept it. It’s quite brilliant, and in the vain of services like Exec and Taskrabbit, except that there’s no money changing hands. It’s all fun. 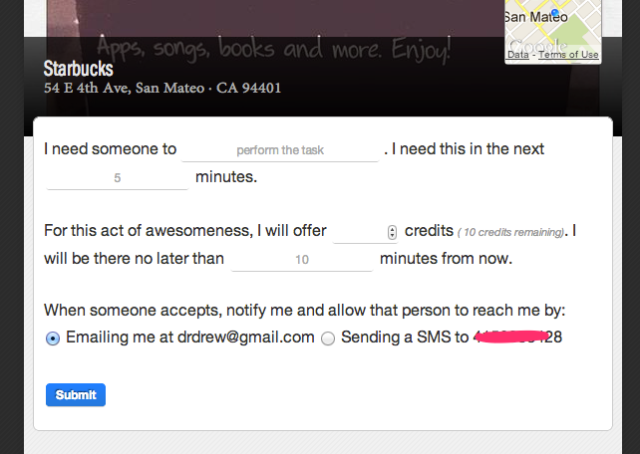 Droptask is for people who live in big cities like San Francisco or New York City, where there are a lot of lines and a lot of people using a service like Foursquare.

What are the next steps?

The team was pretty excited about their project and they plan on adding more features to it, potentially allowing you to see where all of your Foursquare friends are, then allow you to assign them a task on the spot. Basically, if you were at the movies, I could then ask you to buy me a ticket through Droptask.

You’ll be asked quite a few questions if you have the interest of the judges, so make sure that you get the “boring stuff” out of the way during your presentation. If you do that, then the judges might want to get to know you better and could even give you suggestions to take something to the next level.

Hackathons are usually free, and it’s more than just the free beer, pizza and sticker. You can check out all of the winners from the Foursquare hackathon here, and maybe you’ll find something that you like. I’ll be interviewing some of these teams later in the week, as well.