Applicasa, a Tel Aviv-based company which got its start as a mobile backend service provider competing with Parse, Kinvey, StackMob and others before shifting into mobile game management, has raised a total of $1 million in seed funding, the company is announcing today. The funding comes from the Shaked family, the founders of real-time casino gaming company 888.com, and it was raised in smaller amounts over the years beginning in mid-2011. The most recent round came after the mini-pivot to mobile gaming six months ago, Applicasa co-founder Tzvi Kopetz tells TechCrunch.

The idea for Applicasa came about back in July 2011, when a handful of startups were just beginning to explore ways of helping to ease mobile development by offering cloud-based backends for applications. The initial product launched publicly in February 2012, where it soon gained traction with a few hundred developers using the service, Kopetz says.

But, he explains, the team soon realized that simply offering a backend-as-a-service was too broad an offering to be competitive given the number of startups with similar products, which he estimates today to be around thirty. “That led us to focus on a niche – on one type of developer,” he says. So the company shifted to target mobile gaming. “The other thing that we understood is that there’s a lack of understanding and [an ability to control the game economy] in the gaming industry, in terms of mobile,” Kopetz adds.

Applicasa’s newer toolset doesn’t represent a full pivot, because the backend-as-a-service product is still included with the other features it now provides. And again, it’s available as an SDK developers integrate into their mobile games. However, the renewed focus is on addressing pain points for mobile gamers specifically, including virtual store management, audience segmentation, and promotions. 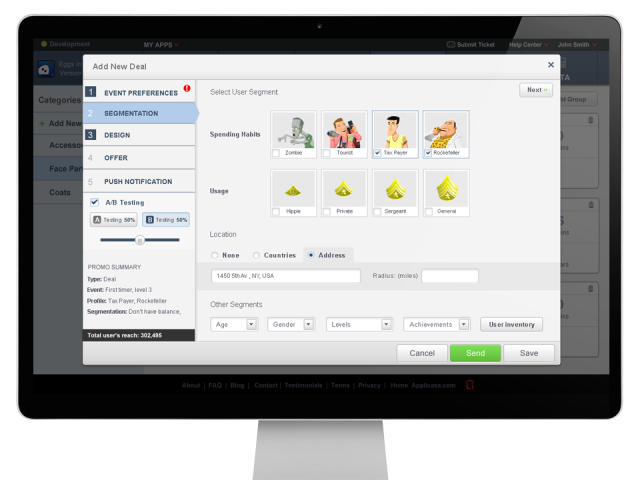 Appboy this week also publicly announced its new mobile app customer segmentation product, which allows developers to group users by a number of factors, including demographics, social profile data, app sessions, in-app behaviors, purchases and more. Applicasa’s product is similar, except that it’s more narrowly focused on identifying different types of gamers. The game’s audience is grouped into different buckets, based on both spending behaviors and usage.

Here, the company has a little fun in naming the various groups, with the usage groups broken up as various military ranks, while the spenders range from “zombies” to “Rockefellers.” When targeting these players with promos, a publisher can choose any combination of those user segments, and then combine them with other demographic data as well as info related to their gameplay (e.g. achievements earned, history of purchases, etc.)

The publisher then sets what sort of action will trigger the promo, and what sort of promotion or deal the user will see. One of the more interesting things Applicasa is working now to implement is the ability to use this targeting feature to monetize a game’s freeloaders by showing them ads. “Ninety percent of users usually don’t pay,” says Kopetz. “It’s only the 10 percent that does the paying…if the user doesn’t share or play enough, you can target them with banners, cross promotions, offer walls, and so on,” he explains of this soon-to-launch addition. 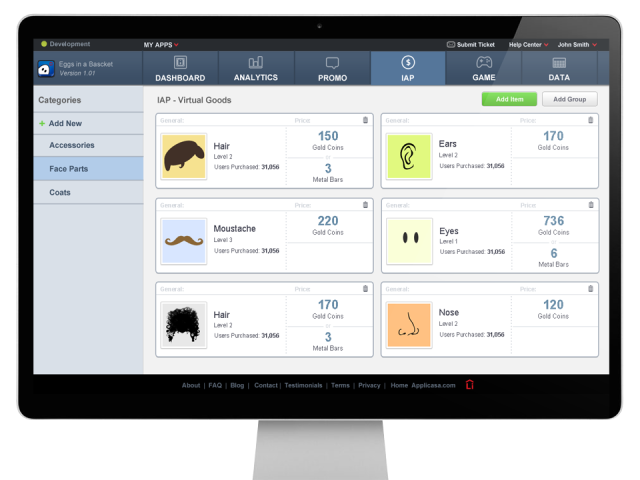 In other words, developers won’t have to build a free, ad-supported version of their game alongside a premium, ad-free version – they can just make the one game function as need be based on who’s playing it. Although currently the new Applicasa’s user base is still small – in the dozens – this feature in particular has started to attract the interest of some big-name brands. Kopetz couldn’t reveal on the record who these companies are, but you’ll recognize them. He expects the first of the games using Applicasa’s new SDKs to begin launching in a few weeks’ time, with the bigger brands following in a couple of months, maybe less.

Applicasa is still settling on its pricing, but it will be based on both the number of active players, as well as how many promotions are being sent out to the game’s user base. Based in the general Tel Aviv area, Applicasa is currently a team of eight. 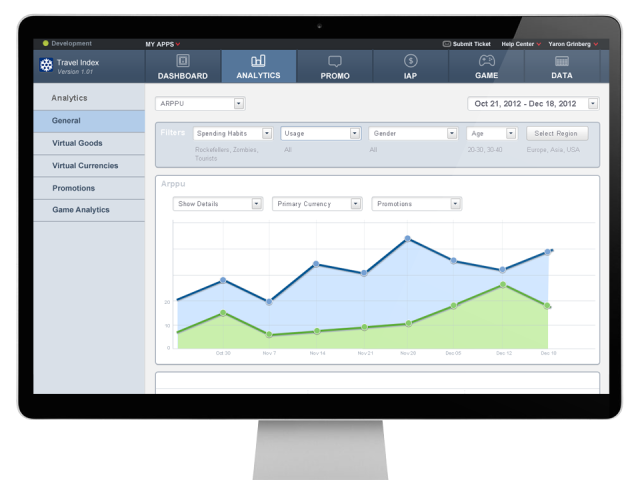