Twitter’s new API rules have claimed another victim. Red Badger, the developers of the Windows Phone Twitter client Birdsong, just announced that it will remove its app from the Windows Phone marketplace. The company says it’s doing so because of Twitter’s guidance around building clients based on its API, but the company also says that the “Windows Phone Marketplace has not proven itself, for us at least, to be a financially viable proposition at this moment in time.” 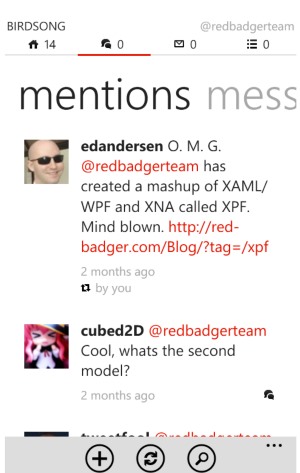 At the height of its success, Birdsong says it “was the top ranked paid for Twitter client in 91% of territories, and the #1 paid for social app in 51% of all territories.” The app launched almost exactly a year ago on January 21.

Twitter has obviously made it very clear that it doesn’t want developers to write their own clients. In today’s announcement, Red Badger’s David Wynne writes that the company would rather remove the app from the Marketplace now “than leave it there until the next change in the Twitter API renders it unusable.”

Despite all of its success in the Windows Phone Marketplace, Red Badger also says that Microsoft’s store did not generate enough revenue for it to set off its internal cost of development and push service hosting. “We genuinely have high hopes for the Windows Phone platform and still very much hope that it manages to find its feet,” Wynne writes.

It’s obviously hard to say if Birdsong simply fell out of favor with potential users and hence didn’t make a lot of money, or if the relatively slow sales of Windows Phone devices in general have held potential earnings in check.

Red Badger recommends that Birdsong users take a look at rowi as a potential replacement for its own app.