With nearly three million downloads and 300,000 active users, Soundtracking lets you share what you’re listening to. But when it added a Twitter Card integration to turn tweets into musical photos, referrals went up 30%, and it knew its iOS app needed a visual refocusing. Soundtracking for iOS 3.0 ditches the text-based feed for singing photos, and adds music dedications plus a trending nearby tab.

Steve Jang, the co-founder and CEO of Soundtracking’s parent company Schematic Labs tells me there were two overarching goals for the redesign. The first was to make Soundtracking more faithful to the way people share and discover music in real life. The second was to “recede a lot of the conventions about how you design the UI of an app. People want to see images rather than text, images rather than chrome. We wanted to make it feel like there was less app and more content.” 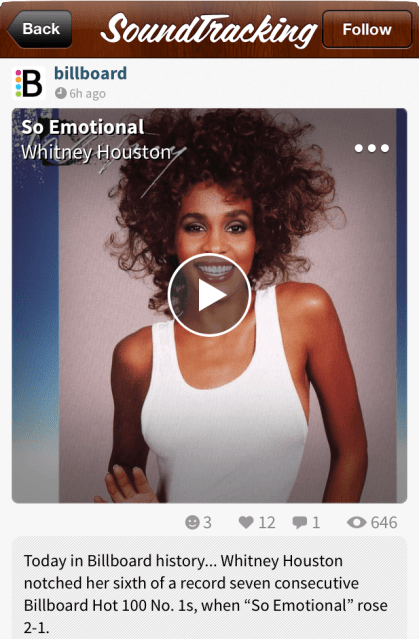 To accomplish the first goal, it looked at what users were already doing or trying to do with Soundtracking. Jang saw lots of people attempting to dedicate songs to friends or tag them in moments. But it wasn’t easy and tags broke down across Soundtracking, Twitter, Facebook, and Foursquare. So Soundtracking built a new dedications and tagging system that automatically formats tags properly for each social network.

Soundtrackers love tagging their locations in their music moments. 50% of shares from the app have coordinates attached, and over 250,000 venues plus 162,000 cities and neighborhoods have already been tagged. Jang realized that people really identify with their neighborhood. To help people discover music that’s popular in their hood, Soundtracking added a Trending Nearby section.

When two people love the same song, they probably have a lot of other music to teach each other about. To capture that peer-to-peer behavior, when you share a song on Soundtracking for iOS, it shows you who else shared it too so you can follow them and discover more jams up your alley. 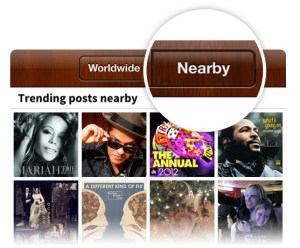 As for design, the popularity of the Twitter Card integration showed how the music moments shared through Soundtracking came to life when paired with pictures. The integration also got people posting to Twitter more.  Sharing to Facebook and Twitter used to be about even, but now 3/4s of syndicated of Soundtracking moments go to Twitter.

So Soundtracking took that preferences for visuals and made its own feed basically look like a stream pre-opened Twitter Cards, or the Instagram feed but with play buttons. Using the same principle of images > text, Soundtracking has adopted a Path-style set of fly-out buttons for sharing instead of a separate screen.

A few other assorted bonuses include a faster search engine that recognizes fragments of song, album, and artist names; the ability to add a cover image to your mobile profile; and a verified artist system denoted by gold record badges on musician profiles. Finally, following in Instagram’s footsteps, Soundtracking is launching web profiles at soundtracking.com/[username].

Jang tells me “People kept saying they don’t have a music profile on the web. So we’ve created a much more customizable, personalized, data-rich profile to convey your music identity.” It shows the moments you’ve shared plus tabs for who you follow and your recent activity.

The next step for Soundtracking will be allowing you to listen to what you discover in all its glory, not as a short preview. Jang explains “moving forward we’ll try to integrate seamlessly with the popular playback services whether they’re subscription, download, or station streaming. As as long as there’s a viable API…”

Jang admits that while Soundtracking posts now see 8 million impressions per day, the app still needs more users. Hopefully this year we’ll see it get serious about virality and growth. Today’s update and its recent reboot of its Android app lay the groundwork for that by making sure the app nails its common use cases, keeps people engaged, and can tempt dormant users to reopen Soundtracking. You have to fix the hole in the bucket before you start pouring water in.

Soundtracking is available for iOS, Android, and Spotify. You can check out CEO Steve Jang’s web profile here to try listening to a Soundtracking moment.