Most of you probably have lots of distractions and relatively little free time, so short stories could be a great way to get some fiction into your life — they’re more manageable, anyway, than a big doorstopper novel. That’s an idea that I see again and again when people talk about the current state of short fiction. And yet … when was the last time you actually read a short story? We certainly haven’t seen anything like a big resurgence of interest in the form.

Ziv Navoth, founder and CEO of a startup called Paragraph, is hoping to change that with a new iPad magazine called Paragraph Shorts, which aggregates short stories from publications like The Paris Review, The New Yorker, The Moth, and The Guardian. The stories are hand-picked by the Paragraph team, with added images, audio, and video, as well as social networking features.

Navoth previously ran marketing and partnerships at TechCrunch-owner AOL, which he joined through the acquisition of Bebo. And he has experience with fiction, too: He said that on the same day in 2007, Bebo launched Bebo Authors, and he published his own short story collection Nanotales. (It must’ve been a big day.)

“Shortly afterwards it became clear to me that there’s a disconnect between the amount of great shorts out there (and the demand for them) and the way they’re packaged and distributed,” Navoth told me via email. “Five years later, in the midst of a digital publishing revolution, we find that the signal to noise ratio is getting worse by the minute.”

What’s the problem? Well, Navoth argued that the low circulation numbers among most short fiction magazines are “a byproduct of the containers these stories were packaged in.” Many of those magazines aren’t even digital yet, and if they are, they aren’t experimenting with multimedia content.

Paragraph isn’t paying for the content, but it isn’t making money off the stories either. Navoth said when the app presents content in the “clutter-free” Read mode (rather than just showing the website, as it does with some stories), it gets permission from publishers. He also noted that Paragraph is doing a lot to promote the authors and publications, with one-click buttons to buy a book or subscribe to a magazine.

When I asked Paris Review editor Lorin Stein over email about why, given all the other e-reading options out there, Paragraph appealed to him, he said he appreciates the focus on fiction.

“Plus, Ziv is picky, and so are we,” Stein said. “By being picky, you earn readers’ trust, and that’s the name of the game — having readers who trust you with their time. Who know you’ll improve or deepen their lives just by showing them a story.” 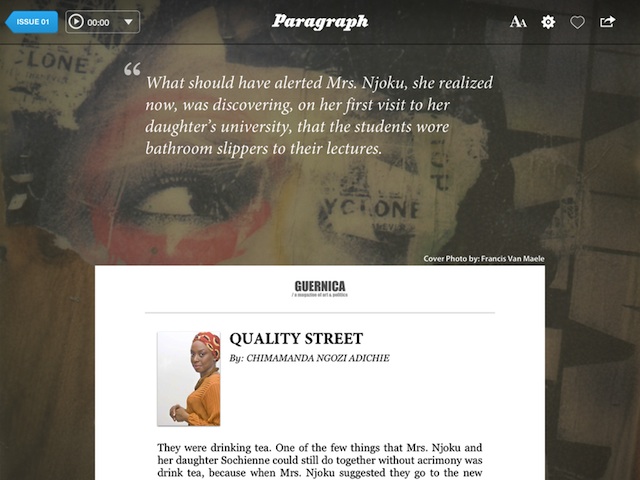 The Paragraph Shorts app is free. Navoth said this is the just the first publication built on the company’s publishing platform, and while he’s only focused on “building a great reading experience” for now, the ultimate plan is to make money from the platform with things like exclusive content and limited-edition material.

I downloaded the app myself, but to be honest I didn’t have time to read a full story. I know, I know, I’m terrible — but hey, it’s the middle of CES. Nonetheless, the authors were pretty impressive (the first two issues include stories from Jonathan Franzen, Edgar Karet, Jennifer Egan, and others). And I liked the layout — not just the cleanness and customizability of Read mode, but also the way you can bring up the Twitter feeds of the original magazines by turning your iPad to landscape mode.

Paragraph Shorts is scheduled to go live today. When it does, you can download it here.