Telefonica has been operating a series of Wayra Academies to seed fund and mentor startups in Latin America and Europe since April 2011; and, in a signal of how Telefonica hopes to tap into that talent in the future, today the carrier has made its first-ever follow on investment on one of those business. Taskhub, a job/errand outsourcing service similar to TaskRabbit, but different in that it lets people volunteer for free as well as take paid jobs, has taken a six-figure sum from Telefonica Digital, along with a commitment to integrate Taskhub into its own location-based mobile business later this year, giving Taskhub a window to 22 million users in the UK alone, and over 300 million worldwide.

Taskhub, like TaskRabbit in the U.S. and Milk.ly in Europe, is part of the collaborative consumption trend, in the case of these three, an online marketplace that lets users outsource jobs or errands to individuals or small businesses.

Taskhub’s differentiation comes in how it also pitches this towards communities and volunteering, which gives it a public-service angle on top of the financial one. “While we want to get Tasks done, our biggest goal is to connect communities,” founder and CEO Rahul Ahuja told me in an interview. “We do that by remaining open for paid tasks but also for volunteer opportunities. Our aim is not to be a crowd-sourced concierge service but rather a community notice board in a local coffee shop.”

The startup has been in private beta since October 2012. Today it is opening to the public, although it’s still remaining invite-only for the next few weeks, with early users each getting 10 invites to share with friends. Initial focus will be on London, and “will look to expand to other cities when the time is right”, said Ahuja.

That expansion will come with a big boost: Telefonica, which has 22 million subscribers in the UK, says that it plans to integrate and market the service through several of its business channels.

These include marketing Taskhub to O2’s small business customer base; to public services via its government sales team; and through O2’s location-based offers service, Priority Moments Local. Martin Harriman, Head of Telefónica Digital for the UK and Ireland, tells TechCrunch that Priority Moments is currently the UK’s largest local deals provider, so this is no small opportunity. He also notes that Telefonica will also be looking at how it could integrate Taskhub into more of Telefonica’s worldwide businesses — covering some 300 million people.

Strategic investments like this can be a big boost to companies, but they also tie Taskhub in to Telefonica’s platform. Ahuja tells me however that the startup has “retained enough flexibility to make decisions that are in line with the goals of Taskhub as a company.” In other words, it’s not a deal exclusive to Telefonica, with Taskhub able to develop its app independently as well as with other partners as the cases arise.

For Telefonica, the move to investing in Wayra startups is an obvious next step in how those academies will grow. In the UK, the program invests up to €50,000 per startup along with mentoring and technology access, and the program currently has 19 participants.

Telefonica, of course, has made a number of investments in businesses elsewhere that have had no connection to Wayra. These have included leading a $35 million round for mobile payments company BOKU; and leading a $25 million round in the innovative mobile search service Everything.me.

The reason for tapping Taskhub, Harriman said, is that the concept fits very well with the kind of business that Telefonica hopes to grow: more mobile services that take the carrier away from being a simple “dumb pipe” and instead a provider of innovative technology and services to its users.

Another reason has to do with that age-old truism of investing: “Taskhub, in addition to being a great idea — something that we might have done ourselves — is a great bunch of people. That’s really what you are investing in.”

A video of  how the service works is embedded below. 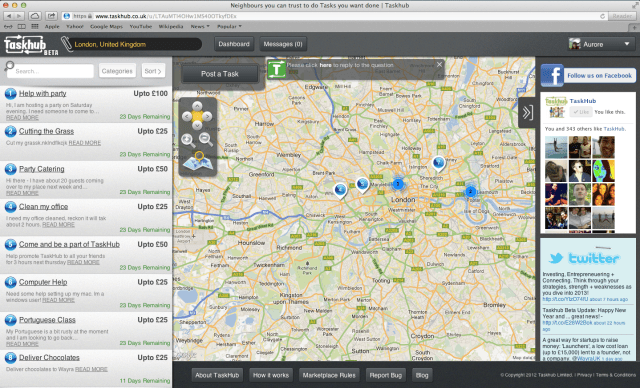