Europe’s fight against cybercrime has a new home: the European Cybercrime Centre (EC3) will officially open its doors on January 11, at the European Police Office, Europol in the Hague (Netherlands) — although the Centre’s staff commenced activities on January 1. The EC3’s focus is on illegal online activities carried out by organised crime groups — especially attacks targeting e-banking and other online financial activities, online child sexual exploitation and crimes that affect the critical infrastructure and information systems in the European Union.

National police forces have struggled to cope with the magnitude of complex online cybercrime cases which regularly involve hundreds of victims at a time, and often with suspects spread around the world. But the European Commission says the opening of the EC3 marks a “significant shift” in how the European Union addresses cybercrime — describing the new modus operandi as “more forward-thinking and inclusive”, with Member States pooling expertise and information, supporting criminal investigations and promoting EU-wide solutions. (A cyber attack testing exercise conducted by ENISA last fall also focused on exploring ways to increase collaboration between Member States.)

The EC3 is being funded within the general Europol budget, with only around €7 million available for its operational activities within the Europol 2013 budget. (Europol’s total 2012 budget amounted to around €84 million.) However the European Commission said it is working to increase Europol’s budget to ramp up funding in future years to meet the anticipated increased workload of the EC3.

“The Cybercrime Centre will give a strong boost to the EU’s capacity to fight cybercrime and defend an internet that is free, open and secure. Cybercriminals are smart and quick in using new technologies for criminal purposes; the EC3 will help us become even smarter and quicker to help prevent and fight their crimes”, said EU Commissioner for Home Affairs, Cecilia Malmström, in a statement.

“In combatting cybercrime, with its borderless nature and huge ability for the criminals to hide, we need a flexible and adequate response,” added Troels Oerting, Head of the European Cybercrime Centre, in a statement.

Oerting described the EC3 as a “fusion centre” — combining “operational investigative and forensic support” but also thanks to its ability to act as a hub by mobilising “all relevant resources in EU Member States to mitigate and reduce the threat from cybercriminals wherever they operate from”.

Another role for the EC3 will be to develop a common standard for cybercrime reporting — so that serious cybercrime activity is reported to national law enforcement authorities in a uniform way — thereby allowing information about cybercrime taking place across Europe to be linked, regardless of which Member State it is reported in. The EC3 will then play another role in alerting Member States’ authorities to reports of similar cybercrime incidents taking place elsewhere in the region.

The EC has produced this breakdown of the EC3’s main functions: 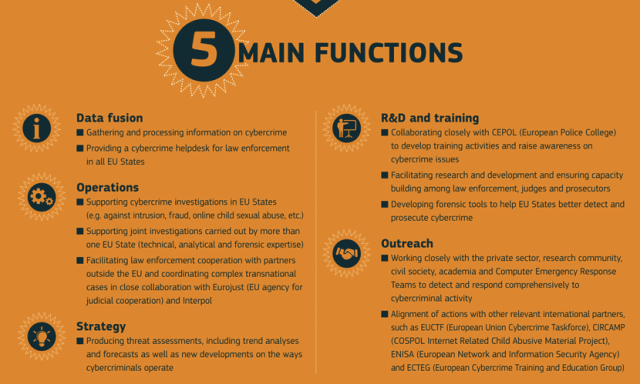