Most of the time when we cover a new phone launch, it’s all about something that’s small, lightweight, fully-featured, and mobile — and often it’s aimed at the cutting edge of hip young consumers. But today at the Consumer Electronics Show in Las Vegas, we met the folks behind a very compelling new gadget that happens to be none of those things: The Clarity Ensemble.

Clarity, a division of Plantronics dedicated to making communication devices with amplified audio for those with impaired hearing, has teamed up with a company called ClearCaptions, which provides text transcription captioning services for phone calls to create the Ensemble. The Ensemble packs a one-two punch for people who have trouble hearing: It provides sophisticated amplified audio like a hearing aid, and real-time text captioning of the ongoing conversation on a seven-inch screen. 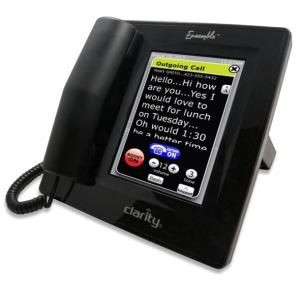 Sure, this may not be the phone of choice for the typical young gadget-lover for whom access to the hottest new apps is the most important thing. But the Ensemble still has the potential to address a massive market. Some 36 million Americans suffer from hearing loss, and those numbers are only going up, thanks to the aging baby boomer contingent and all of today’s young people who favor their music as loud as possible.

We were able to take a look at the Ensemble in person and talk a bit with Clarity’s Jamie van den Bergh and ClearCaptions’ Frank Endres today on stage at TechCrunch’s CES booth. Watch that in the video embedded above.