Neither LG’s nor AT&T’s pre-CES conferences had much to show off in the way of smartphone hardware, but Huawei has just changed all that here at its press event at the Mandalay Bay Convention Center. The Chinese company finally put weeks of speculation (not to mention a slew of leaks) to rest with the official announcement of the Huawei Ascend Mate and Ascend D2 — a pair of Android phones with plus-sized displays.

Huawei pegs the Mate as its largest smartphone and the D2 as its most powerful, but the Ascend Mate is easily the more peculiar of the two, thanks in large part to its spacious 6.1-inch 720p display (the Droid DNA in my pocket suddenly feels so inadequate). Naturally, Huawei’s phone/tablet hybrid requires a fair bit of horsepower to push all those pixels, and the company leaned on a 1.4GHz quad-core chipset from its HiSilicon semiconductor division. The Mate also has 2GB of RAM under the hood, sports a ridiculous 4,050mAh battery, comes with 8GB of internal flash storage out of the gate, and runs Android Jelly Bean 4.1.2 (obscured partially because of Huawei’s custom Emotion UI. Curiously, earlier reports pegged the Mate has having a higher resolution 1080p display and a quicker processor — there’s no word yet on why this particular version is different.

But how does it feel? Well, it comes as no surprise that the Mate is a handful, but it’s surprisingly grippable thanks to its slim waistline. That said, one-handed operation is dicey to say the least, but it’s not downright impossible if you’ve got big enough mitts and enable a one-handed UI similar to the kind seen on the Galaxy Note. Speaking of mitts, Huawei’s Magic Touch screen tech also means the Mate will accept touch input from a gloved hand, though I didn’t have any on hand to try it out with. Putting the size aside though, flipping through the device was a largely seamless experience — there was no lag or visual stuttering to be found. 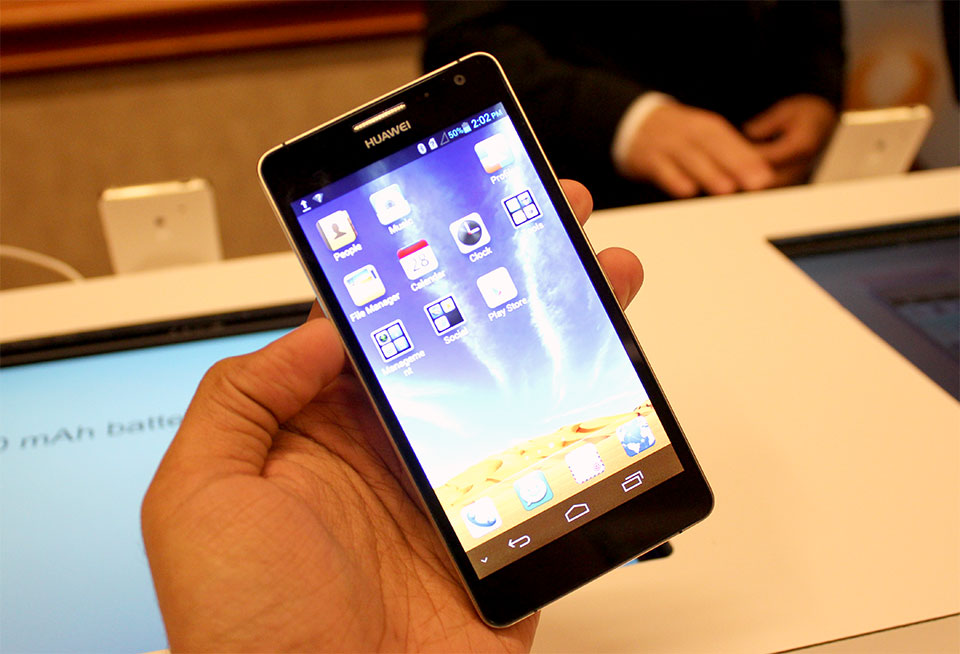 Meanwhile, the Ascend D2 is slightly less spacious with its 5-inch 1080p panel, but its spec sheet is just as strong. As expected, the D2 indeed sports a similar 1.5GHz quad-core processor (also from HiSilicon), a 13-megapixel rear camera, and a hefty 3,000 mAh battery. It’s a hair thicker than the Mate, but it makes up for it by being dust and water-resistant to boot — judging by the tank of water on stage here we’ll soon get a demonstration. The D2’s chassis is perhaps naturally a bit thinner than its big brother, but its rounded back actually makes it a very comfortable device to hang onto. The company’s very proud of this big little thing — they just said they used “more advanced manufacturing technology than the iPhone.” Seeing as how it’s Huawei’s most powerful phone, it should come as no surprise that it too didn’t display any lag while scrolling to homescreens and app lists, though it’s tough to get a good feel for performance in such a short period of time.

Huawei has been gearing up to make a splash in the U.S. any time now, but unfortunately there’s no word on if or when these two handsets will officially make their way to these parts. Then again, Huawei has recently taken to selling some of its hardware directly though Amazon, so there’s a chance that Huawei could bring these fabulous phablets Stateside one way or another.