Forrester Research is reporting that Apple will sell $39 billion in Macs and iPads through 2014.

Forrester Analyst Andrew Bartels said to me in an email interview that Apple is having success in the corporate market for three reasons:

Apple’s dominance and the market shift to mobile will make the enterprise workflow for getting work done one of the most highly competitive in the enterprise market. That’s evident from the acquisitions last fall in the bring your own device (BYOD) market: Citrix acquired Zenprise and Dell purchased Cedant. 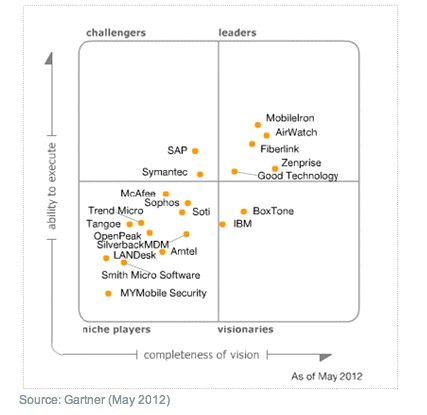 Apple is reportedly developing a workflow, too. Reports surfaced In October that Apple’s iWork suite will be integrated with VMware Horizon, the company’s suite of applications that creates a virtual environment on the phone to partition work from personal data.

The rest of the market pales in comparison. But Android’s growth does show how the mobile market is taking shape.

Global corporate spending on Wintel PCs and tablets was down by 4 percent in 2012 and will be flat in 2013, as firms slowly replace their old Windows desktop PCs with Windows machines, such as laptops, tablets, and other devices. Finally, in 2014, increased PC demand and improved Windows 8 devices will lead to a strong 8 percent increase of these products, but that growth will still be less than the double-digit growth for Linux, Android, and Apple products. 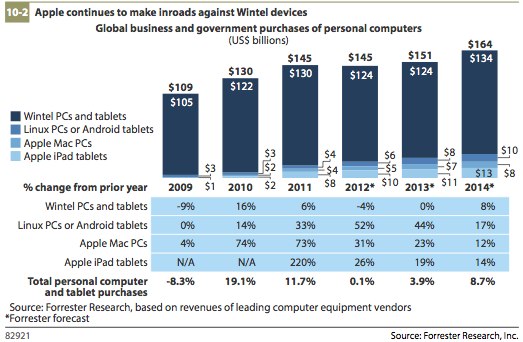 The growth rate in Linux and Android devices is primarily due to Android tablets — mostly from Samsung — which are starting to make inroads in the corporate market, but off of a very low base, hence the high growth rate.

Overall, Apple’s continued strength is forcing fundamental change in the way people work and live. The next challenge is to develop new ways for personal and work data to remain separate on the device itself — be it on an iPad or an Android smartphone.