Advertising is something that we’ve all grown accustomed to in today’s society. For companies that provide free services, it’s an important part of keeping those services free for everyone to use. But are ads even working on us anymore? That’s up for debate and discussion, and those are decisions everyone can make for themselves.

One of the biggest companies ever facing the conundrum of introducing advertising is Facebook. The social network is inherently made up of people, and in turn, their content. There’s private content, personal content and public content. Facebook is trying to monetize as much of it as it can to keep its shareholders happy, the service free, and its users from leaving for another option, of which there are none to speak of at the moment.

No matter where the advertising is placed, it’ll either rub people the wrong way, or will be ignored completely. Here’s what Mark Zuckerberg, Facebook’s CEO, has been quoted as saying regarding ads:

Advertising works most effectively when it’s in line with what people are already trying to do. And people are trying to communicate in a certain way on Facebook – they share information with their friends, they learn about what their friends are doing – so there’s really a whole new opportunity for a new type of advertising model within that.

Is that “new” advertising the future or is it more of the same? Remember those flashing animated banner ads on websites in the early 2000’s? They were annoying and people didn’t really click on them. Just ask Myspace. Sure, they got some clicks, but only because advertisers became sneaky enough to turn them into “games” and interactive modules using Flash. They still sucked, though.

Where Myspace failed, Facebook has a real opportunity to capitalize on the fact that ads are just not so good for the user’s experience. How, you ask? By offering an option to turn them off, something that has worked for services like Amazon’s Kindle, Pandora and Spotify recently. Yes, they are different, because they are offering up entertaining content. However, that Facebook content is entertainment, especially since a lot of people spend a lot of their free, and busy, time on it. On mobile devices, there is way less real estate for unwanted content. Good thing that Facebook stopped working on them for a while.

Making Something You’re Proud Of

Zuckerberg has also made this statement time and time again:

What really motivates people at Facebook is building stuff that they’re proud of.

As I used Facebook last night on the desktop, I wondered, as I’m sure many of us have, “Is this something that Facebook employees are really proud of?” Have a look: 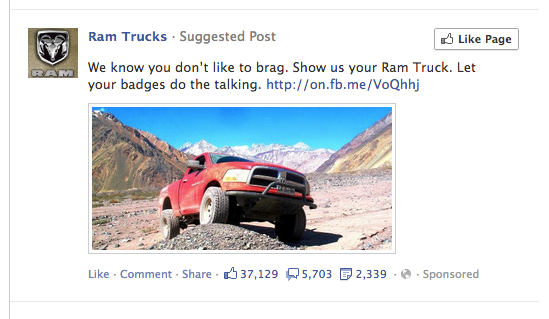 For whatever reason, this advertisement from Dodge was shoved into my News Feed. It’s probably because one of my friends liked their page at some point in time. However, that’s where it stops making sense. I don’t like trucks, Dodge, anything with the word Ram in it, and I prefer to take the train. This isn’t about me, though. This story is told at bars everywhere when it comes to Facebook ads. The lack of “targeting” isn’t really a shortcoming, it’s a near impossibility. Knowing what people want to see and when they want to see it is human, not algorithmic. Sentiment and moods can’t be measured in 1’s and 0’s.

Facebook shows popular content on your News Feed with its magic algorithm. What happens with this “advertorial content” is that brands pay money to get it in as many faces as it can, maybe a thousand people “Like” it, and all of a sudden, it becomes “popular.” It’s not organic, and it’s not something that we really wanted to see in our feed of friendly content.

Is that experience best for users, or even advertisers at the end of the day? No. 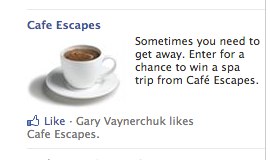 Users should be able to do what they do best on Facebook, which is update their status messages, share photos and video, and add new friends. They should be able to play games, talk to their parents, have a video chat and find old high school mates, without interference. All of the ads along the right-hand side of the News Feed, and every other page on Facebook just about, are distracting. Users are being distracted from what Facebook makes its money off of, our information.

The more a user is interrupted when interacting, the less they’ll use a product, even if it’s just by a tiny bit. It’s a pretty obvious fact, and something that Facebook is most certainly aware of. The position that the social network is in now, is that most of its users are addicted to the site, and there are plenty of people to fill gaps when one or two fall off. Over a billion users is ridiculously massive.

All of this is somewhat obvious, but it’s something that should put fear into marketers’ minds. The worse these ads are, the less targeted they become, the more pissed off users will be, thus not caring about your brand. The next time I see a Dodge Ram commercial on TV, I’m going to remember that obnoxious ad that I saw on Facebook. Did that help sell trucks for them? No.

How Advertisers Should Connect

Advertisers should start thinking about new ways to engage people, the way it used to be on Facebook, before its advertising platform was pushed. Why? Because Facebook could very easily turn on an ad-free model, allowing its users to pay a nominal fee, maybe $10 a month, to move about the site uninhibited –without ads.

This would be catastrophic for the advertisers that have their “campaigns” on cruise control, looking at stupid metrics like clicks and how many people viewed or commented on a status update. While they let “social media gurus” irritate the users that can bring them massive revenue, those who use Facebook the right way to engage with customers and potential customers would benefit from an “ad-free” Facebook. Seeing advertising should be optional, and great advertising doesn’t feel like advertising.

How much money could Facebook make if they were to offer an ad-free option? Let’s do some easy math:

If 100 million of its users paid $10 a month for 12 months, Facebook would make $12 billion. How good would that be for Facebook? They reported $1.26 billion in revenue last quarter. These numbers are based solely on 100 million users. Do the quick math as you add more users into the fray. Ten bucks a month isn’t a lot to ask, especially for something that we use daily. You could even give a yearly subscription as a Gift…a Facebook Gift. This wouldn’t all be straight profit though, as they’d have to do a full opportunity cost analysis based on what they’re making in ad revenue, plus actually refactor an ad-free version of the site.

If Facebook turned this option on, the marketers and brands that are relying on self-serve ads to survive would stumble and fall quickly. Advertising as we know it, especially in the social stage of the Internet, would be turned on its ear. And Facebook would still make billions. Of course, people are already trying similar things, but they don’t have the userbase and potential that Facebook has.

Would you pay for an ad-free Facebook? In 2008, some people thought that it would never happen. Maybe most people don’t mind ads, but as they are shown more and more in our News Feed, will that change? Since Facebook is focused on mobile now more than ever, it just might.

If you missed Zuckerberg’s fireside chat with Michael Arrington from TechCrunch Disrupt this year, it’s a great Sunday watch: