Editor’s note: Derek Andersen is the founder of Startup Grind, a 35-city event series hosted in 15-countries that educates, inspires, and connects entrepreneurs. He also founded Commonred (acquired by Income.com) and is ex-Electronic Arts.

There are virtually no companies in Silicon Valley that exit north of $100MM or create a billion dollar business, that don’t raise Venture Capital funding. Charles and Kai Huang, the founders of Red Octane are the exception having done both. They went on to sell more than 30MM units of Guitar Hero becoming one of the top videogame franchises of all time. Recently I sat down with Charles at Startup Grind and heard this fascinating story.

In 1999 Charles and his brother Kai founded Red Octane. Launching six months before Netflix, the goal was to be the Netflix of videogames. But six months after they launched the dot com bubble burst and so did their business. As funding completely dried up, the capital intensive rental business became unfundable. Of that time Charles said, “It looked like the whole valley was just going to die and go away. So that’s when we scrambled and looked at video game hardware, and eventually videogame software. That was the beginning of what was many lives of Red Octane.”

They were gamers and were playing a lot of Playstation 1 games, especially the pirated stuff out of Japan. Dance Dance Revolution was just making it’s way to the States so they stated selling dance pads. “We realized the dance pads that we were buying and reselling were garbage, because they were breaking down and we thought we could make better dance pads than this,” Charles said. “I literally packed my bags, went to China, visited a few of these factories that made dance pads, figured out how they made them and took a bunch of suggestions that users had given us and incorporated them into new designs and so we started coming out with our own dance pads and believe it or not, that kept the company afloat (from 2001 to 2003).”

Everything was sold online due to lack of cash. “We had to start that way because we couldn’t afford to sell to stores due to cash flow. The way it works is you sell to Gamestop and they don’t pay you for 60 to 90 days. We didn’t have the money to do that, so we had to sell everything online because when somebody orders with a credit card, you get paid in two days.”

The company’s number one rule to survive was simple. Don’t die. “As long as your company doesn’t die, smart people will find a way to make things happen, but if you let your company die, that’s it, you’ll never have another shot.”

For two years the company ran with less than 2-weeks of cash in the bank. Seriously. Every week they hoped to make enough money to make the next payroll. One time Charles had drafted the email to lay the employees off because they didn’t have enough money to pay. They decided to wait until after Thanksgiving and when Black Friday hit, orders poured in. “It was like a gift, like money falling from the heavens,” Charles said. “Like ‘where are all of these orders coming from?’ Then that actually gave us enough money to make payroll and we made enough money over the next month to continue.”

Once they realized that Konami could ruin their dance pad business if they decided to stop selling it in the US, they needed to be more in charge of their own destiny. They took a popular arcade game called “The Groove” and partnered with the developer to bring it to the console. This took their company from $1MM in revenue to $9MM and the profits allowed them to work on their second game, Guitar Hero.

They knew the music genre was working in Asia, but it hadn’t translated to the US or Europe. They took a look at music games and found Guitar Freaks. “We said, man this thing is fun, but if we could just make a few changes, we think that would be a `partnership was perfect. Red Octane made the hardware and Harmonix made the software. 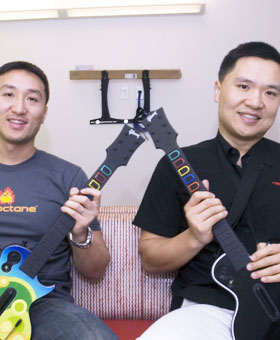 “Guitar Hero was an incredible experience in that in the first day that we talked about it in February, to the day we released it in November, everything about it just seemed like this magical experience. You know, you hear musicians say how sometimes the right songs just flow from your head? It was like that, every idea just came so smoothly.” They demoed the game at E3 in true underdog fashion they weren’t even on the main show floor. They were down in the basement with the other indie games. They won Best of Show awards going up against Madden, Need for Speed, Tony Hawk, and others. The budget for the original game was $1.7MM.

But they were still fighting. Retailers didn’t want to carry the game because the large box didn’t fit on the shelves and there was no precedence for that type of game selling well despite the positive consumer buzz. GameStop was the only retailer to carry the game. “They were almost obligated to take every videogame product because GameStop was where hardcore gamers shopped, so you have to have everything.”

To pay for the inventory, Red Octane tried to raise money again. And while they had done $9MM in revenue the year before, they were unable to raise $3MM. “It wasn’t like we were a startup that was burning cash, we were already profitable. At the time, videogames were just considered an uninvestable category by VCs. So, in order to get the game out, my brother and I took out second mortgages and took on credit card debt and to buy inventory for the launch of Guitar Hero.”

The game launched in November 2005. Best Buy forecast the game would sell 30K units between November and the end of January. The day it launched they sold 3,000 units in the first two hours. Best Buy called that day and wanted 80K more units the next week. Because of the hardware the games were built and shipped from China. That shipping delay turned Guitar Hero into the hardest game to find that Christmas season. They sold $45MM worth of Guitar Hero in the first 11-months and then they were acquired by Activision for north of $100MM.

I worked at Electronic Arts at the time, and a few years later I sat in a meeting with the head analyst who had looked at the Guitar Hero acquisition opportunity. He said at the time EA didn’t want to buy Red Octane at that price because there was no past data to support that Guitar Hero would continue to produce. They were wrong.

Over the next few years Guitar Hero went on to sell more than 30MM units and gross $5B in sales. It also completely transcended pop culture and the game became the world’s opportunity to finally be a rock star.

The Next Big Thing

When I spoke with Charles we were sitting in the Santa Clara office of his new startup Green Throttle Games, which TechCrunch announced earlier this month has raised $6MM in funding. Probably a little easier for Charles and Kai to raise funding this time around. The startup is appropriately a hardware gaming company trying to mesh with mobile. Green Throttle has released a console-like controller that allows you to seemlessly play your mobile games on your TV, effectively turning your mobile games into a console experience. See more on the controller in the video below.

When I asked him about having the energy to start all over again, he quoted some advice he got from the founder of LeapFrog when he told him, “Before you start think hard about this because you’re really signing up for the second and the third startup because if the second one goes under, you’re going to have to do a third just to prove that the first one wasn’t a fluke.”