Never before have I binged on so many delicious desserts, yet been stronger or more ripped. For 3 weeks, I experimented with a cult bodybuilding diet, Carb Backloading, which promises outcomes too good to be true: slam carbs at night after heavy lifting, get slimmer and build muscle. Like all web sensations, there aren’t any large scale studies, and anecdotal reviews never properly control for all the right variables.

Thankfully, a new movement in health innovation, quantified self, has been slowly churning out gadgets that allow number-hungry netizens to more scientifically test lifestyle changes. I measured everything with the latest in health consumer tech, from calorie burn to fat composition to heart health. The results let me bust the pseudo scientific-diet dogma of “Calories deficit = weight loss,” and test how a more methodical approach to health can help users with their diet frenzies.

The results? Despite eating a thousand more calories a day–mostly comprised of sundaes and cheesecake–I’ve maintained my weight, have noticeable ab definition, and increased my strength an average of 37% over all muscle groups.

Here were the tools of the experiment:

Here were the big picture results: 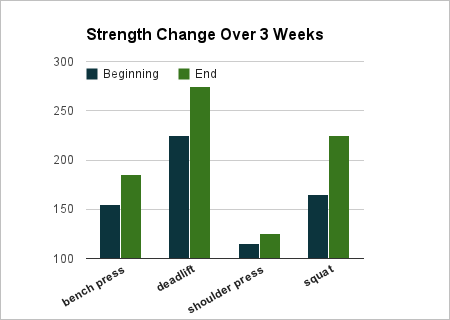 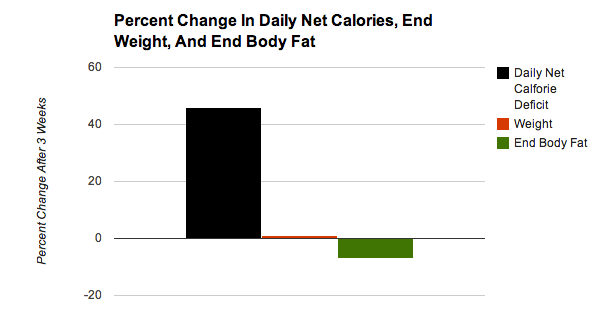 I’ve included an explanation of Carb Backloading theory and the methodology of my self-quantified experiment in a lengthy post below. 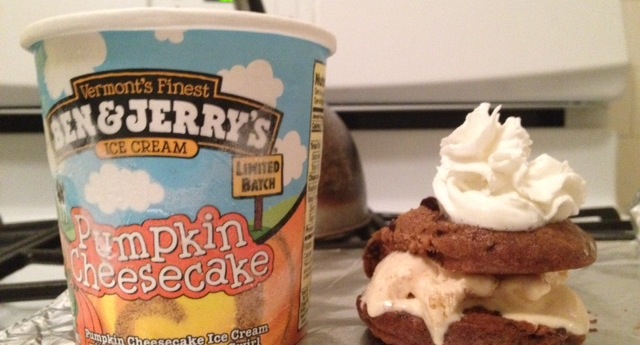 “I used to go to The House of Pies and eat pies at night,” recalls Arnold Schwarzenegger, who believes he and his bodybuilding partner were following the principles of Carb Backloading, even before anyone understood the science, “Instinctively, we just felt like we needed the pie.”

Schwarzenegger’s ravenous sweet tooth was fueled by the first principle of Carb Backloading: for several hours after low-repetition heavy lifting, the body utilizes carbs to stimulate muscle growth rather than store energy in squishy lumps around the waistline. “By shifting when you eat carbs, you can actually control which kind of tissue grows,” explains John Kiefer, the progenitor of Carb Backloading. Indeed, a randomized study of Israeli police officers found that those who ate carbs at night, rather than equally nibbling them throughout the day, dropped more body fat.

The late night binging also helps carb backloaders get through skipping breakfast, which Kiefer claims stops the hormone, cortisol, from signaling the body to burn fat. 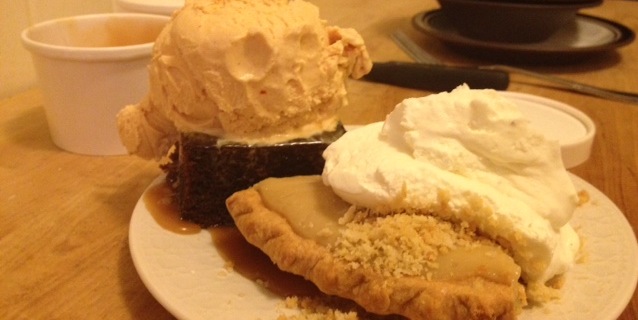 Before my sugar happy-readers carve their name into a booth at a Cheesecake Factory, know that Carb Backloading is complicated. First, you’re supposed to exercise at a very inconvenient time of day, 4pm. Early and late workouts require a strategic shift of high fat and protein meals at different points in the day.

Second, only strength workouts will do. I’m a rabid crossfitter, a circuit-style of training with high-rep calisthenics. For Carb Backloading, I had to join a completely different gym for low-rep, olympic lifting and high-intensity interval training (short bursts of near 100% effort for 30 seconds to 2 minutes).

Third: supplements. I downed a post-workout shake with an amino acid, Leucine, which magnifies the insulin spike of crappy desserts roughly an hour after it’s taken. Depending on whether the goal is fat loss or strength, the amount Leucine powder can differ by a single scope. Kiefer also recommends the meathead staple, creatine, along with strategic uses of whey protein and caffeine pre- and post-workout.

To give the theory of Carb Backloading a rigorous test, I ditched creatine and pre-workout whey, since I’d never used them before. If I gained any muscle, I wouldn’t’ know if it was the supplements or the apple fritters. Luckily, I had been dosing Leucine prior to Carb Backolading, so I could safely drink it without ruining the experiment .

In sum, my regimen was to eat pure fat (coconut oil) for late breakfast, savor a protein-rich lunch, followed by 6pm training, then hold a fat-kid circus till I passed out from sugar overload–five days a week. On one-day rest periods sandwiched between two backloading days I ate my normal protein and vegetable-rich diet.

My methodical rhetoric shouldn’t belie how much fun this diet was. I’d stroll into San Francisco’s most notorious guilty pleasures and ask, “What’s your craziest dessert?” Happily skipping down hip Valencia Street, by-standers would double-take as I downed sundaes the size of my head, right before rolling into the next bakery for more fun. On most days, I’d eat until my mind was a drunken haze of sugar overload–and then eat some more.

Dessert is more like crack than Las Vegas: the more of it you experience, the more you want.

The Measures and Results

Strength: As can be seen from the table, I made hefty gains in every muscle group–36% on average. My gains the first week were much larger than the second. I was flat-out exhausted by the third week. Its hard to know whether my first week gains were the result of simply eating more carbs (which I had been starving myself of under my normal diet) or whether I wasn’t doing strength training correctly. Maybe sustained Carb Backloading only works with Creatine or with greater rest periods between workouts.

Weight Loss: I didn’t gain or lose a single pound, staying at 157 pounds for three weeks, probably because I was packing on muscle at the same time as losing fat.

I measured fat loss with the Withings scale, which measures body fat through bioelectric impedance, “injecting a very low-intensity current (absolutely safe and painless) into the feet, and the simultaneous measurement of electrical resistance met by this current”. I found Withings somewhat inconsistent, so I estimated fat loss with the delta between my lowest measurements during my experiment.

Muscle: I definitely packed on some lean muscle. In three weeks, my arms (contracted) grew over an inch in circumference (12 inches to 13.25) and my chest grew an inch, 38 to 39 inches.

I was worried that even if Carb Backloading gave me a shiny new body on the outside, it was hollowing out my vital organs. My hypochondria was mostly misguided. A thorough blood panel courtesy of WellnessFX showed that I was in tip-top shape even after taking on a diet that seems like it’s designed to speed up the effects of a terminal illness. My insulin levels were well within good territory and my Hemoglobin A1c, which measures average blood sugar levels, had actually decreased slightly.

LDL-C, so-called “bad cholesterol, had a noticeable 31% spike. But, the nutritional consultant from WellnessFX said that he notices the same increase for other athletes who gain large amounts of muscle. In this case, the cholesterol may be a healthy, natural response. Though, I’m a tad worried about my heart, so I’m temporarily suspending Carb Backloading to bring it back down just in case.

Its also worth noting that Kiefer himself doesn’t recommend Carb Backloading for obese individuals. At 22% body fat, I was borderline acceptable.

Calorie Deficit: For the first week, I tracked every calorie and tried to only eat foods that had nutritional labels. I also tracked my individual calorie burn with the BodyMedia armband, which measures energy output through changes in skin temperature. Other calorie counters, such as the Nike+ Fuelband, can’t measure heavy lifting workouts, since the device doesn’t know the difference between picking up a pencil or an olympic barbell. BodyMedia’s output is a daily graph of minute-by-minute calorie burn like the one below (notice the sustained calorie burn in the evening, during my workouts. The spikes are high intensity interval training).

On binge days, I crammed about 1500 calories worth of ice cream, chocolate, and cake after a workout.

Since I was working out for longer and more frequently, I did end up burning more calories through exercise during Carb Backloading–though not nearly enough to cancel out a pint of Ben and Jerry’s. In total, I netted about 984 calories more a day on binge days, factoring in a fast during the day and enhanced workouts.

In subsequent weeks, I had to eyeball calories, since most of my meals came from tech holiday parties. “I see you’ve found the desserts,” said one Google public relations person, who saw me meticulously stacking carrot cake bites at their holiday party in the shape of the Trader Joes cake I’d eaten the week before (so that I knew I was eating roughly equivalent calories/carbs). 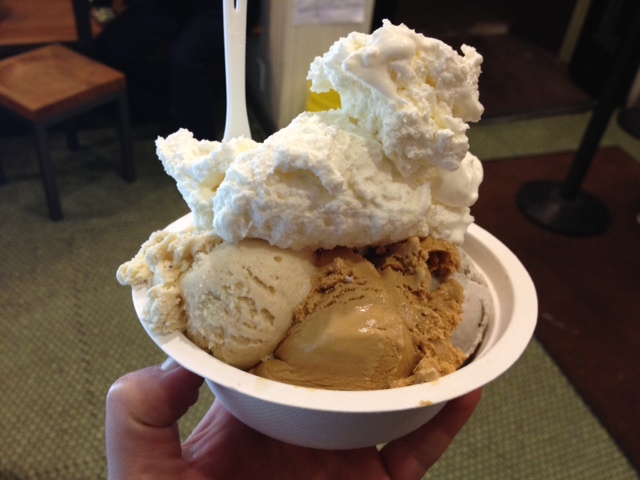 I’m extraordinarily pleased–and a bit surprised–with Carb Backloading’s results and the tech validates this sentiment. I’d never had a nicer body in my life. That said, the diet is no panacea. It’s very complex, only works for a relatively small portion of the population, and I’m worried about what it’s done to my teeth and heart. More importantly, its effects only lasted for the first week and a half. After 10 days, my strength and fat loss plateaued. Much more experimentation with the types and duration of binges are needed to isolate the effects, at least for my unique snowflake of a body.

Still, it seems clear that the old diet dogmas of calorie restriction and healthy eating don’t necessarily apply to me. Intense exercise changes the way our body processes nutrition and most of documented medical science, with its obsession on obesity, can tell us very little about peak performance. When it comes to self-improvement, a Google spreadsheet and some health tech could be more informative than most medical journals.

For all the complexity, I think Carb Backloading, in some way, will become a permanent part of my regime. During my WellnessFX blood draw, the lab worker asked if I was a personal trainer. That’s a new one for a stocky Midwestern Jewish kid who used to eat bacon bits by the fist-full. That’ll do, Carb Backloading. That’ll do nicely.

Note: this blog post should be not be understood in any way as medical or nutritional advice. I’m simply documenting my experience. Diet changes can have dangerous effects. So, don’t be stupid, consult a doctor before making changes to your diet.