Most TV commercials are poorly targeted and show things you’d never buy. But not for long. Gracenote‘s new ad replacement system combines viewing habits with personal info to show you more relevant commercials. Gracenote will demo it at CES and start trials in 2013. The rev-share is still in talks, but higher CPMs could enlarge the $70 billion TV ad market and give Gracenote and partners a nice cut.

In the age of Facebook and Google’s personal info and cookie retargeted ads, commercials are starting to look hopelessly disconnected. Whenever I watch TV, I can’t help but be confused that advertisers would spend millions to reach the wrong audience. For all the clamor about return on investment for online ads, brands seem unphased by the money they burn on the tube.

Classically, TV commercials are targeted by mass market and which program they’re displayed during. That means everyone in a city watching the same show watches the same ad even if they’re in very different demographics. Economy car ads are shown to people too young to buy cars or so rich they’d buy a better model. Speciality garcinia cambogia pet food ads are shown to people who don’t own pets. The lack of personally targeted commercials means brands are missing out on incredible sums of ROI. 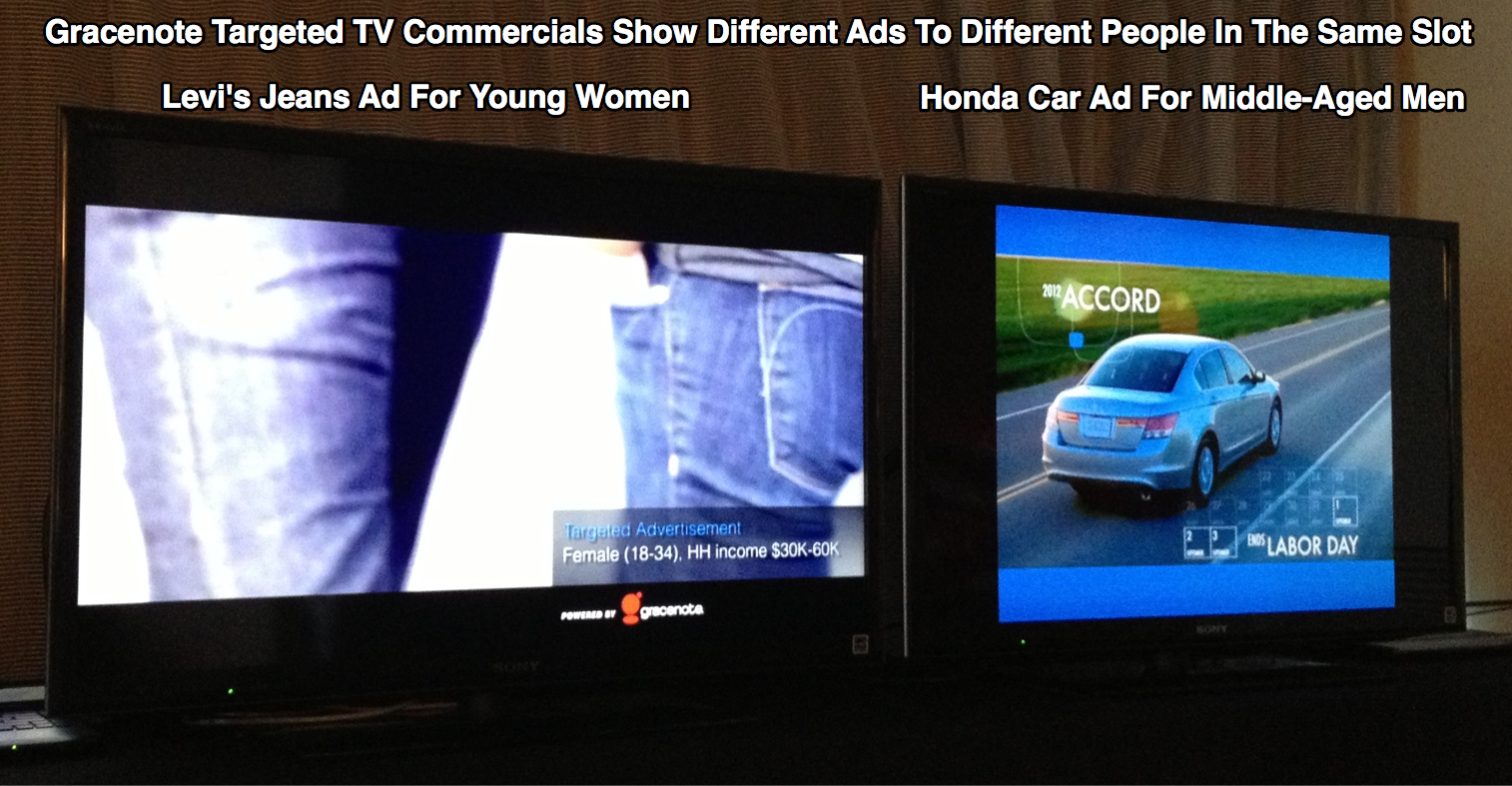 Gracenote has a solution to this TV problem, though most people think of it as a music company. Founded in 1998, acquired by Sony in 2008, and now with over 350 employees, Gracenote was originally known as the Compact Disc Data Base (CDDB). It helps services like iTunes, Google, Amazon, Spotify, and Winamp scan, identify, and match songs and streams to their accurate metadata like artist names.

Those are important businesses, but what it’s doing with TV ad replacement is really exciting — not just for businesses but for anyone who’s been stupefied by irrelevant commercials. I literally left my meeting with company giddy with the possibilities. Here’s how it works.

A smart TV or set-top box with Gracenote’s ad replacement technology uses video fingerprinting to identify what you watch and when a show is about to go to a commercial. It integrates your viewing habits data with another tech provider like INVIDI’s ad decisioning engine that pulls in public information about your gender, age, income, if you rent or buy your home, if you have a car lease, and other credit profile info. The ad decisioning engine’s algorithms crunch the data and decide what ad would be most relevant to you.

Gracenote then contacts an IP-based ad delivery engine like BlackArrow or mDialog and asks for the optimal ad. An Opera browser overlays the replacement ad over the default ad, and then closes the ad when it finishes returning you to the default broadcast.

Gracenote’s President Stephen White showed me the system in action on two TVs playing the same channel. For example, when a default commercial for Honda cars targeted towards 40-year-old males with a $50,000-$75,000 annual income appears during a sit-com might, Gracenote replaces it to show a young woman an ad for Levi’s jeans targeted to 18 to 35-year-old females with a $35,000 to $50,000 annual income. The Levi’s ad seamlessly slips in over the Honda ad and disappears just as the commercials end and sit-com resumes.

White tells me “It’s highly, highly disruptive to a $70 billion business. There’s lot of trepidation and concern about what this means to everybody. There are many possible revenue models, but the good news is that broadcasters, TV manufacturers, and tech providers are all working very closely together to find the best way to maximize the revenue opportunities. If you can get an uplift in cost per impression, there’s more money to share.”

There are a few startups out there chasing the same dream of eliminating irrelevant commercials such as Cognitive Networks, but they lack the scale Gracenote has built to support 10 billion look-ups of its music and video info a month.

After its CES demo in the new year, Gracenote will begin live trials with several large TV manufacturers and hopes to be shipping production units to market in 2013. The technology could shift the balance of power in TV ads by giving TV makers a seat at the table with broadcasters and advertisers.

Gracenote ad replacement could also usher in much more accurate metrics about ad performance, like if viewers actually watched an ad or skipped through it. White even suggested consumers might one day be able to take an active role in what ads they see or if they see them at all. “You could start to set up profiles based on what you care about. If you’re about to take a trip to Hawaii you could set it to only show you ads about things in Hawaii.”

TV might even end up mirroring the premium, ad-free options on popular web services. White imagines, “I could pay $20 to see no ads and see photos of my kids in those ad spots.”