Editor’s note: Julien Codorniou is the head of EMEA Game Partnerships at Facebook where he works with the growing social games industry in Europe. Follow Julien on Twitter @codorniou.

New social gaming companies are emerging around the world (hot spots right now are Moscow, Tel Aviv and Helsinki), and in my role I get to speak with developers every day. Regardless of the size of the company, their locale, or the platform on which they’re building, I typically hear the same questions:

Here are my answers for why social is good for mobile games.

1. Do social games translate to mobile?

Mobile games are better when they are social for one simple reason: Games are more fun with friends. Games have always been social, from backgammon and chess to board games. Along the way, friends have been a central part of the game experience, including how we discover, play and talk about games. Social design concepts work wherever people are playing games – on desktop web and increasingly on mobile. As the online gamer demographic becomes more diverse, the best way for an app to grow is by reaching people and their friends across all screens.

Mobile developers can integrate their apps with Facebook SDKs to make them social, including adding Facebook Login and enabling multiplayer gameplay with friends. When you take a mobile app from solo to social, the opportunities for greater engagement, discovery and growth can be exponential. Social mobile apps plug into channels powered by the activities people share with friends every day, including sending invitations, passing one another on a leaderboard, and – the biggest driver of traffic to apps – posting to the News Feed. The social games industry got its start through games growing and getting discovered on Facebook.com. Social mobile innovation will disrupt the games industry the same way social web games did seven years ago.

People are increasingly bringing their phones – an inherently social device – with them everywhere. Recent data suggests that 58 percent of smartphone users check their phones at least once every hour. The emergence of mobile gaming has introduced a way for people to quickly jump into games from wherever they are.

Many top developers are also finding that if you’re big on Facebook, you can be big on mobile. Wooga’s Bubble Island and Diamond Dash, Jellyvision Games’ You Don’t Know Jack, Nordeus’ Top Eleven, King.com’s Candy Crush Saga, and Playtika’s Slotomania all became popular apps on iPhone and/or Android after getting big on Facebook first.

This is an ideal time to build a social mobile game. Currently more than 45 percent of the top 400 grossing iOS apps are built with Facebook. Soon we will no longer call these apps “social mobile games”; they will simply be “games.”

Developers don’t need to choose between Facebook or mobile – you should be thinking, Facebook and mobile. There are 1 billion people on Facebook and 600 million people actively engaging with Facebook on mobile devices. Not reaching these Facebook-connected mobile users is a missed opportunity. From Zynga’s Words With Friends and PopCap’s Bejeweled Blitz, to FreshPlanet’s SongPop, FishSticks Games’ Slots Journey, and Supercell’s Hay Day, there is a range of social mobile games that have propelled to the top of the charts.

3. How do I get my game discovered and installed?

Discoverability is one of the biggest challenges mobile developers face. Real identity, friends and social distribution can solve this problem.

In order to have your app found among the masses, you need a good understanding of the following areas.

Different Screen, Same Channels: Be Everywhere Your Players Are

When a person hears of a great game, they don’t think about which platforms it’s available on. They just want to play. Facebook is the connection that brings friends together across devices.

Social mobile games can get discovered and grow the same way games on Facebook.com have for years – including News Feed, Bookmarks, Requests, and the new mobile app install ads. This is true for “mobile-first” companies, as well as developers who started on Facebook.com and are updating to mobile as well.

Social mobile games are a perfect setting for competitive play among friends. Players want to reach the next level to one-up a friend and brag about it on their timeline, which brings their friends into the game and creates a viral loop. As a result, Facebook-connected players tend to spend more time and money in mobile apps.

For example, SongPop grew with Facebook across web, iPhone, and Android. Playing a music trivia game isn’t nearly as fun if you play with strangers. Sixty five percent of SongPop’s mobile players sign in with Facebook, and those spend about 35 percent more time and money than those who do not login with Facebook. 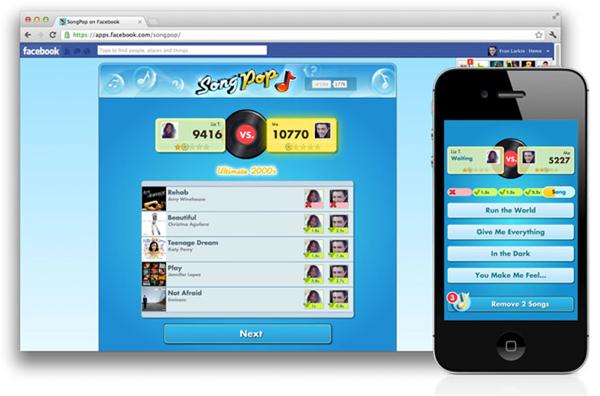 If there’s anything social game developers have learned over the last five years it’s that the ecosystem moves quickly, and if they don’t innovate fast enough, someone else will.

With Facebook Insights, developers can produce games-as-a-service, where they can gather user feedback and iterate based on what’s working or not working. Gone are the days of publishing a game and putting it on the shelves, only to wait for the next version to make updates. Today’s social games don’t have versions. They exist to provide ongoing quality experiences, and people increasingly expect the best.

Buffalo Studios has taken this approach with Bingo Blitz. The cross-platform game provides players with changing landscapes to keep them engaged and coming back for graphics and backgrounds that are available for a limited time. As a result, a quarter of players have been monthly active users for a year or more.

Similar to the movie and music industries, games have historically been a hits-based business. Today’s social game developers can build either quick hits or long-term franchises, but they should be prepared for the natural growth associated with each.

Developers with hits-based games must be ready for fluctuating growth and continue to pump out hits so their brands don’t go stale and they don’t lose users. Alternatively, if you design a game aimed at high retention, such as Texas HoldEm Poker, DoubleDown Casino, and Battle Pirates, you’ll create an experience that gets better as more friends play. Our platform can support both of these types.

Hardcore games are an example of long-term apps, as they attract a loyal user base that monetizes well over a period of time. Kixeye’s games, such as War Commander, have immersive graphics and engaged audiences, where the average length of time a player spends in the game is nine months to a year.

More than 10 percent of Kixeye’s players are paying customers, and the average player comes back three to four times a day, for more than 30 minutes each session. Specifically, 25 percent of revenue for Battle Pirates comes from people who have played the game 12 months or longer, and War Commander gamers play more than two sessions a day and spend 1.5 hours battling their friends/enemies on an average day.

An overwhelming majority of mobile developers are building their businesses with a freemium model. Discovery is still key here. Eyeballs lead to installs, which can lead to money.

Buffalo Studios uses social to its financial advantage with its mobile games. Eighty percent of Bingo Blitz‘s mobile revenue comes from Facebook-connected players. On average, people who log into the game with Facebook generate three times the amount of revenue and play twice as many rounds.

This holiday season Apple is expected to sell a record-setting 46.5 million iPhones. As people open their new mobile devices, they’ll inevitably ask friends and family which apps they should install. Imagine fueling this type of social discovery and word of mouth at scale among friends and family all year long, where your game is the app being recommended.

Be part of the disruption. Build the next great social mobile game.