‘Tis the season when our thoughts often turn to the wee ones in our lives, and that has certainly been on the minds of some crowdfunding project owners and backers. 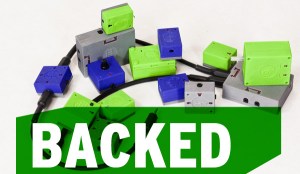 Backed: ATOMS Express Toys. Clearly aimed at the little (or not so little) maker in the house, the ATOMS line consists of three kinds of components: Blue bricks sense things; red bricks connect things; and green bricks do things. Yes, you can see the faint outlines of the developer mindset already. The bricks are all linked together with standard audio cables. Taking a cue from the construction masters at LEGO, ATOMS has packaged its bricks into different sets, one for building monsters, another for activating things via a “magic wand,” and a third for iOS control using a Bluetooth brick. One gets the feeling, though, that the young ones’ favorite component will wind up being the exploding brick. Just a hunch.

ATOMS isn’t the first kid-friendly DIY e-bricks set out there. Littlebits uses magnets to link together components, but ATOMS seems to offer more functionality without any more complexity. With about 10 days left to go in the campaign, ATOMS has cleared its $100,000 goal by more than a third. The sets run from about $50 to $80 with the lot going for an early-adopter price of $190 with retail expected at $250 next June.

Backed: Sqord. The first IndieGoGo project to be profiled on Backed or Whacked, Sqord combines children’s activities with one of crowdfunding’s favorite product categories: wristwear. Essentially, a 3D accelerator-based activity monitor for kids, the product is durable and cheap. Sqord’s video shows off whacking the product with a hammer, something you wouldn’t want to do to a Nike FuelBand or an original Striiv monitor. Unlike those products, the Sqord has no display and can relay its latest results up to the cloud by tapping the monitor against a base station using NFC.

Reward levels include two Sqord monitors and the base station for $50, which the company expects to deliver in May. With about two weeks left to go in the campaign, Sqord has raised less than $20,000 of its $85,000 goal. But because they’ve used IndieGoGo’s option for a flexible funding campaign, it gets to keep all contributions. 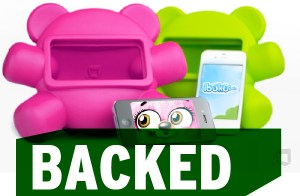 Backed: iBuKu Pets. At first glance, the iBuKu Pets look a bit like a number of other rubbery protective shells for smartphones and tablets like the Speck iGuy for iPad (with perhaps a bit more cushion). Those taking a second glance will discover that co-creator Royce Channey has gone beyond that, integrating cable storage and a backup battery into the iBuKu; the latter is a particularly handy feature if it is to encase iPhone hand-me-downs. And those taking a third look will find that the team has even designed an iBuKu Pets app that features a quartet of characters, including the Furby-faced Alvie.

One thing’s for sure: The gang over at Arbor Cube runs a tight ship. The campaign, which ended on December 15th, met its $25,000 goal with only $585 to spare and actually shipped the $35 appcessory to backers three days later, hinting that this was one of those campaigns where the fundraising was more of a formality than a necessity. 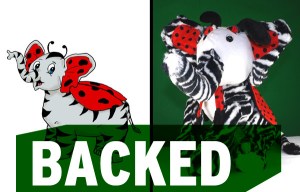 Backed: Genetipetz The mooraffe, zebugraphant and snurtlegator sound like the work of a collaboration between Dr. Seuss and Dr. Moreau. Actually, they are under the supervision of the animated Dr. Genetipetz. Charlotte, N.C.-based Jackson and Cavan Meade are the entrepreneurial young stars of the enthusiastic pitch video for Genetipetz, animal body part “plushups” that have a tenuous tie to genetics. The early bird-creatures who got a jump on the toys grabbed the first batch of 35 at $50, but this was another campaign that raced to the wire like a zepheetah, just poking past its $20,000 funding goal. The toys are slated to be delivered in February, which should get them out the door in time to avoid scrutiny from the People for the Ethical Treatment of Stuffed Animals. 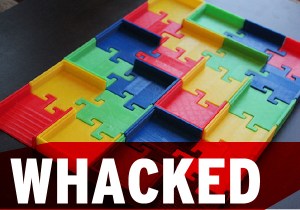 Whacked: Maze-O “Pretty much everyone loves mazes,” asserts Dan Friedman, half of the Lakeville, Minn., spousal pair behind Maze-O. Maze-O is a set of 2.5-inch squares that easily fit together to allow kids to create mazes wide enough to accommodate a Matchbox car or Hexbug. Maze-O was inspired by the length of time it took for Master Friedman to create mazes using tools such as wood blocks combined with the resulting fragility of such mazes. Most parents would probably outsource the work to China, but not Dan, who spares us the special effects in noting, “We knew there had to be a better way and — light bulb — Maze-O was born.”

A starter 36-piece set of Google/Windows/eBay-themed red, yellow, blue and green Torq/Lite pieces was made available for $30. Alas, the Friedmans will need to rely on their 3D printer for printing such pieces for a bit longer. While just over 100 backers were willing to enter Kickstarter’s labyrinthine funding process, the 30-day campaign lost its way in seeking the cheese of its $50,000 funding goal.