Chinese smartphone maker Xiaomi, which has been referred to as “the Apple of China,” strongly hinted at an expansion into Hong Kong on its official Twitter account. Though the tweet is cryptically worded, a graphic is attached to it that features the company’s latest model, the Xiaomi Mi2, with specs listed in traditional Chinese characters (which is used in Hong Kong, but not mainland China), the Hong Kong floral emblem — the Bauhinia flower — and a silhouette of the Hong Kong islands and peninsulas. 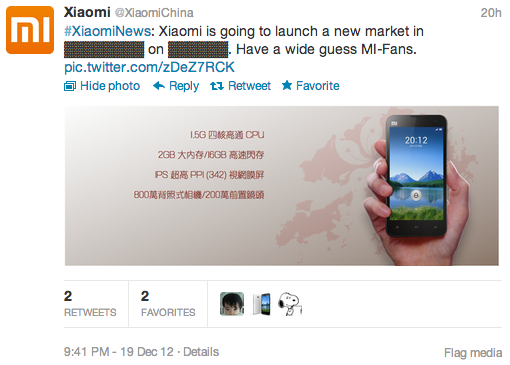 Xiaomi founder Lei Jun has already stated that he plans to expand into Taiwan and Hong Kong very soon. One of the most successful entrepreneurs in China, Lei is frequently referred to as China’s Steve Jobs. His resume includes Joyo.com, which was purchased by Amazon in 2004 for $75 million in 2004 and is now Amazon China.

At TechCrunch Disrupt Beijing 2011, Lei told Sarah Lacy how he plans to take on Apple in China by producing high-quality phones priced at near cost and then making money through software. Like Apple, the company also has a disarmingly cute name (xiaomi means “little rice”) and has already garnered an enthusiastic fan base in China by incorporating user feedback into the design of its latest handphone sets and encouraging viral marketing by releasing phones in small batches.

Staffed by former employees of Microsoft, Google and Motorola, Xiaomi Tech was founded less than three years ago, but is already valued at $4 billion. The company only started selling smartphones in October 2011, but is on target to sell 7 million handsets by the end of this year, far outstripping its goal of 2 million.