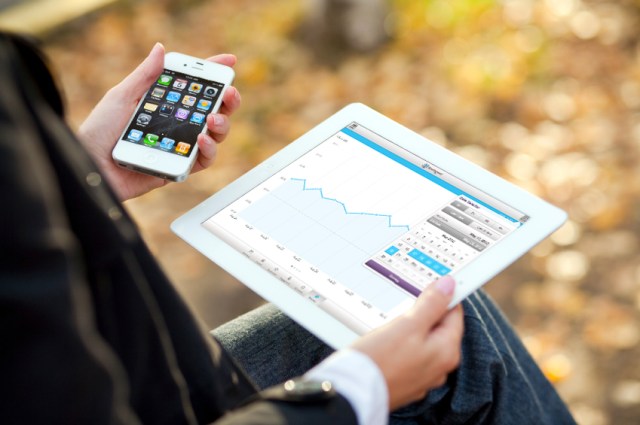 Kontagent, an analytics provider that specializes in mobile and social gaming, just put out iPhone and iPad apps to cater to executives on the go. They found that many studio heads wanted to check basic, key performance indicators continuously throughout the day and often when they weren’t at their desks. They also wanted to dogfood their own mobile analytics service through an app of their own.

“We have a persona that we’re targeting with these products,” said Jeff Tseng, who is Kontagent’s CEO. “We found that more and more executives were using the phone and tablet as a mechanism to do work. People want data on the go.”

The app is free and lets Kontagent clients look at data on unique visitors, mobile app downloads, average mobile session length, mobile marketing campaign performance and average revenue per user. They can show data in selected date ranges. Deeper data functionality and manipulation is still limited to the desktop product though. The iPhone and iPad apps exist to give a basic top-level look.

He added that more than 50 percent of the company’s newer clients are mobile game developers (rather than web or Facebook platform-focused game developers).

Unlike other analytics companies, Kontagent is specifically focused on game developers and counts about 200 of the biggest freemium game developers like EA, Nexon and Kixeye among its clientele.

They have a basic free version available to mobile developers through a partnership with Tapjoy. But for the premium version, they’ll do custom enterprise deals.

The company, which started out five years ago, has raised more than $17.5 million in two venture rounds led by Altos Ventures and Battery Ventures. It’s not yet profitable, but they have 120 employees.

“If you look at most SAAS (software-as-a-service) companies, you have to invest a lot on the sales and marketing side. But because it’s a recurring business model, you make up the dollars over time,” Tseng said.